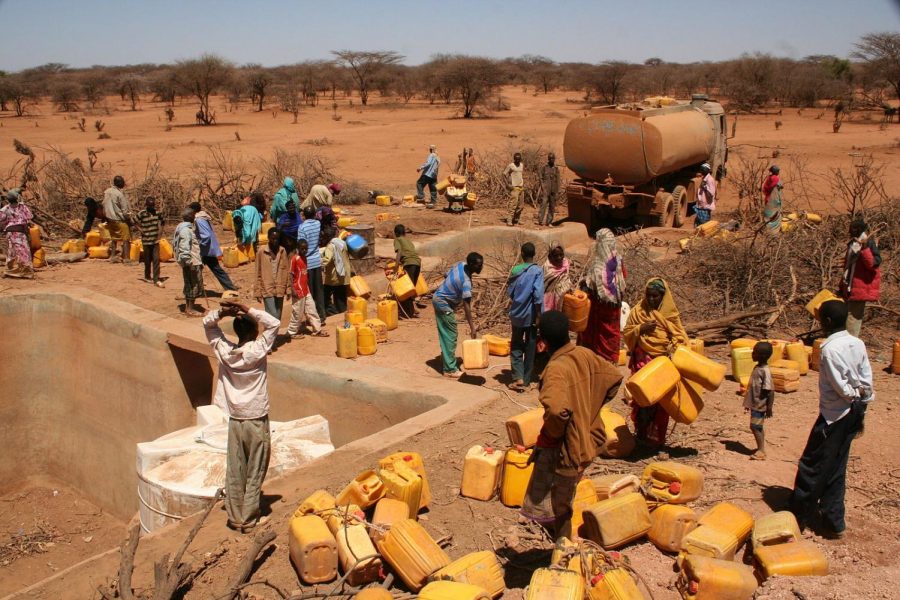 Water is distributed in the rural areas of southern Ethiopia during a period of severe drought.

As the world shuts down due to COVID-19, the long-term water crisis continues to disrupt billions of human lives as nations fall victim to droughts.

According to recent data from the World Resources Institute (WRI), 17 countries face “extremely high” levels of water shortage. There are over 150 additional countries that are currently experiencing the worsening water dilemma. In total, nearly 25% of the world’s population are directly threatened by this global climate issue.

These threats are largely posed by water waste from agricultural systems, industries, and irrigation. Together, they drain nearly 80% of all water supply each year from countries that face high levels of water shortages. Ultimately, this drainage serves as a risk for vulnerable, dry-spell-ridden areas to become immediate crises.

“Water stress is the biggest crisis no one is talking about,” said Andrew Steer, president and CEO of WRI, in a press release. “Its consequences are in plain sight in the form of food insecurity, conflict and migration, and financial instability.”

With the use of recently updated Aqueduct tools, such as the Aqueduct Water Risk Atlas, WRI researchers found that global water withdrawals have at least doubled since 1960. Because of studies like these, the WRI deemed water scarcity as “one of the defining issues of the 21st century.”

This rapid increase in water usage is primarily due to a rise in human demand. These demands cause water shortages that can threaten human livelihood, despite satisfying the businesses that depend on them.

“We, as consumers, are in a vicious cycle of detriment. We want more, so more is produced. This production becomes normalized; no one sees a problem with it. Then, we demand more, and the process repeats itself,” said junior Clara Szego.

However, growing water demand isn’t the only catalyst for this crisis. Climate change, water waste, and pollution also threaten the world’s water supply — all of which are factors influenced by human behavior.

With these factors, the human impact on climate crises is beginning to come to light. For instance, Venice’s waters have cleared, and emissions have lowered throughout the past month in response to a lack of human activity from the COVID-19 outbreak.

“There’s certainly a real re-emergence of nature in ways that we haven’t seen in a long time. The connections to disease spreading when we eliminate much of the natural world has become more pronounced, so I hope that we can deal with this immediate crisis but also preserve these drought-ridden spaces,” said Lara Brikes, the head of sustainability partnerships and social impact for Sonder, Inc.

Amidst the outbreak, experts such as Brikes believe it is essential to continue to work to resolve these underlying climate issues that directly jeopardize the well-being of our planet.

The effects of water shortages can range from endangering public health to widespread hunger, and eventually to poverty. While these issues may seem far away compared to the recent outbreak of COVID-19, water scarcity still poses a threat to areas across the world. According to the World Wildlife Foundation, two-thirds of the world’s population may face even greater water shortages by 2025.

“By ignoring the planet’s well-being, we are ignoring vital aspects of our humans, that is, well-being. We should be focusing on this climate crisis because until we care about the health of our home, we cannot make any significant and lasting progress regarding the health of her people,” Szego said.