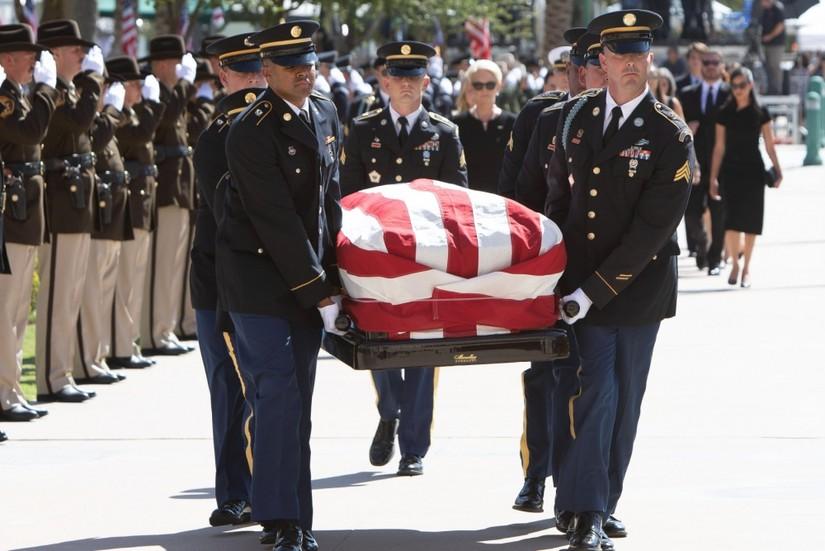 Senator McCain is laid to rest in Washington D.C. after his memorial service on Sept. 1.

Senator McCain was known to many as “the maverick” due to his unconventional attitude towards Conservative politics. Despite being a Republican senator from Arizona, McCain was a strong proponent for bipartisan policy and advocated for cooperation among Democrats and Republicans to address issues.

The 2016 presidential election highlighted McCain’s “maverick” status. Senator McCain remained vocal against the policies proposed by now President Donald Trump and remained adamant in his beliefs when other Republicans yielded. McCain pushed against many of Trump’s policies and argued that Trump was incapable of holding such a high office.

Earlier this week when it was announced that Senator McCain would no longer seek treatment; it was also announced that President Trump would not attend any of McCain’s memorials.

Senator McCain represented the power of bipartisan politics. Former President Obama highlighted this in his speech. McCain’s omnipresent respect for members of the other party allowed for laws to be passed which met the agendas of each political party.

Though the current political climate in America seems to be the most divided it has ever been since the Civil War, McCain worked to close the divide.

Now, there is nobody in the Senate, from either party, with an attitude like McCain’s, and his absence poses the question: what is the future for American bipartisan politics?

“My name is Joe Biden. I’m a Democrat. And I love John McCain,” the former vice president said at Senator McCain’s Arizona memorial service on Aug 30.
Aretha Franklin funeral spurs controversy
The late musical diva was honored and laid to rest on Aug 31. Musicians, politicians, family members, and fans alike flocked to Detroit to pay a final tribute to Aretha Franklin, however, the pastor’s eulogy was controversial.

Aretha Franklin gained popularity as a musician in the 1950’s years before the wave of African American singers from Motown Records emerged. She became famous as an African American woman at a time when it was uncommon for any African American to gain recognition beyond their own community.

Franklin’s popularity, however, transcended racial, age, gender, and social division. Her music served to unify a divided America during the civil rights movement and continues to be a shared appreciation among Americans of all kind.

She used her platform to pave the way to equality for not only African Americans but for all. She will forever be remembered as the “Queen of Soul.”

The pastor, Rev. Jasper Williams Jr.,  seemed to highlight Franklin’s status as an African American soul musician and claimed that “Black America was losing its soul.”

While Franklin’s family denounced the eulogy, Williams defended his speech stating that comments like his were valid following Trump’s election and the civil rights movement.

While Franklin remains one of the most prominent African American figures in modern popular culture, the eulogy at her memorial seemed to advocate for the return to more traditional racial values: a cause to which Franklin fought against.

“I was trying to show that the movement now is moving and should move in a different direction,” Williams said, according to The WashingtonPost. “… What we need to do is create respect among ourselves. Aretha is the person with that song ‘R-E-S-P-E-C-T’ that is laid out for us and what we need to be as a race within ourselves. We need to show each other that. We need to show each other respect. That was the reason why I did it.”
Colin Kaepernick becomes the face of the new Nike campaign
After stepping aside from his football career, former 49ers quarterback Colin Kaepernick is one of the faces of Nike’s new “Just do it” campaign.

Kaepernick sparked controversy when he began to kneel during the national anthem at football games. He began kneeling in 2016 in protest to the treatment of people of color in America and inspired dozens of other athletes to follow his leave.

While some thought his protest was admirable, equally many believed that his actions were disrespectful and unpatriotic. When Kaepernick’s contract expired in 2017, he was not picked up by another team.