Time to take a stand against bullying 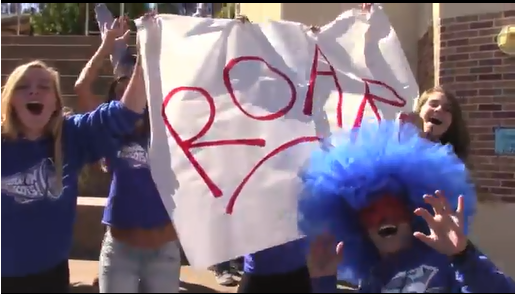 ASB students created the "Roar" video and dedicated it to the strong victims of bullying.

“We have all been bullied around at least one point in our lives. Any step Carlmont takes to end it is a step in the right direction,” said junior Maddy McGee.

Carlmont’s Associated Student Body (ASB) is currently organizing an anti-bullying campaign to speak out for students who are victims and survivors of this cruelty.

This campaign has already started with ASB’s music video to Katy Perry’s “Roar,” which can be found on YouTube at this link: http://www.youtube.com/watch?v=gFx3g9ST2BA.

Senior Class Vice President Ryan Dimick said, “Katy Perry set up a contest on ‘Good Morning America’ asking for schools to make a music video for her song ‘Roar.’ The winning school would receive a live concert from her in late October. We dedicated our entry to bullying.”

Many of our own peers have been through bullying during their time as a student.

Junior Brian Palma said, “I’ve been bullied before when I was the ‘new kid’ back at Ralston. But that changed when I learned to open up to people. As for the campaign, I’m just happy that they are trying their hardest to take a stance against bullying and helping the new kids and students who feel like outsiders.”

Junior Reid Withrington also had past experiences with bullies and said, “I got bullied during my first year of middle school so I understand what a huge problem bullying can be, and I think it is great that Carlmont is taking action against bullying.”

Other students have not had bullying experiences on our campus. Julia Semmler said, “I have never been bullied, so I don’t think the campaign applies to me so much.”

Kaitlyn Kelly has not been bullied here but still encourages the campaign, “I have never been bullied at Carlmont, but I think that it is a really good idea to try and fix this issue.”

The question is, to what extent will this year’s campaign impact bullying?

“I think that this campaign will make a difference because I know that a lot of students are bullied and it is a big problem,” said Kelly, “Hopefully it will make kids more comfortable at school.”

McGee rooted for the campaign and said, “I believe that it has the potential to make a difference, and the more effort we as a school put into it, the more we will get out of it.”