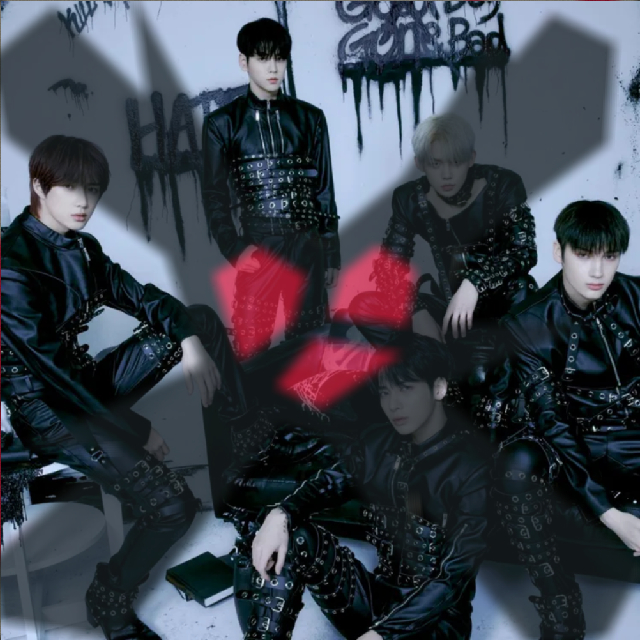 TXT uses a dark color palette in their concept photos to illustrate the main themes of their EP. Heartbreak, shown in the broken heart of the album art, is the primary subject of the five songs.

K-pop group Tomorrow x Together (TXT) has returned with another stellar album. This extended play album (EP), titled “Minisode 2: Thursday’s Child,” features five songs and is a continuation of TXT’s current storyline. TXT is under the same company as international pop sensation BTS and consists of five members: leader Soobin, Yeonjun, Beomgyu, Taehyun, and Huening Kai.
Opening Sequence
Before listening to the album, I thought “Opening Sequence” would be an instrumental track. I was pleasantly surprised when I found out otherwise.

The dance practice video reminded me of another BTS song, “Black Swan.” It was poetic and seemingly inspired by ballet. The coordination and synchronization were hypnotic. To say this song was amazing would be an understatement, as words cannot describe how spectacular it was.
Good Boy Gone Bad
“Good Boy Gone Bad” is the only track in this EP to have a music video. The video in question was super intense in the best way. The music video may confuse new fans or those like me who have not dedicated all of their free time to following TXT’s storyline. It is a mystical third part of their last few albums, The Chaos Chapter: Freeze and The Chaos Chapter: Fight or Escape. While their previous main songs, “0X1=LOVESONG (I Know I Love You)” and “LO$ER=LO?ER,” were about a failing relationship, “Good Boy Gone Bad” explores life after that relationship ends. The series reminds me of BTS’s universe storyline, which will likely be a theme in all of HYBE Entertainment’s groups.

Instead of following the same melodic themes as other K-pop breakup songs, such as “Gashina” by Sunmi, this song has a rock sound and is angrier than others. I would say it’s more like Ateez’s “Rocky” than anything else; they have similarly intense choruses and an element of whispering that ties the song together. The two songs have quick tempos, with little room to slow down. Fast-paced songs are always very exciting, and “Good Boy Gone Bad” is no exception.

The sets, especially the graveyard, were awesome; my only question would be about the giant eye. It was a little bit out of place, but giant eye-like structures seem to be a trend in K-pop music videos. Taehyun destroying one of the sets was super fun to watch and was probably the highlight of the EP.

I thought the lyrics to this song were very emotional and hard-hitting, even though much of the chorus was repetitive. It was nice seeing Huening Kai rap alongside Yeonjun; he has more potential than he has been able to exhibit.

The dance practice video was also very cool. The coordination required for it was impressive, but what was more astounding was how easy TXT made the choreography look. Their joints looked like they had minds of their own yet were synchronized so beautifully, elegant rather than robotic. The balance of the choreography and the group was fantastic; they made it look so smooth.
Trust Fund Baby
This song surprised me. I expected it to be similar to “Good Boy Gone Bad.” It was considerably different from my expectation, but it was still good.

If the act of crying were a song, this would be it. “Trust Fund Baby” was emotional. It was heartbreaking. It was one of those sappy breakup songs that everyone secretly loves. I shed tears listening to it, and I rarely cry to music.

The instrumentals sounded, sad but had the same vibes as a horror movie with a few optimistic quirks. Beyond the instrumentals, the lyrics were phenomenal. Yeonjun’s rap lines were nice and flowed well. Soobin’s lines had me almost crying; they were beautiful and haunting. The echoes were a terrific addition.

I hate feeling scared. However, “Lonely Boy (The tattoo on my ring finger)” inflicted a welcome fear. It seemed appropriate to the lyrics, and I didn’t feel so horrible after it subsided.

I especially liked the acoustic beginning. It began mounting anticipation before the chorus, pulling me in and stealing my focus. The rest of the song incorporated guitar sounds, not too staccato but not super gentle either. In any other song, I would argue that it was doing too much. However, this song was not too complicated. It was as near to perfect as it could get. It is not my favorite song on the album, but it was still spectacular.
Thursday’s Child Has Far To Go
“Thursday’s Child Has Far To Go” is the final track in this album. It is the title track and was generally pretty good. I felt, however, that it did not fit the theme of the album. It was weirdly optimistic, despite having sad lyrics, and was off-putting. It reminded me of Ateez’s “Eternal Sunshine,” which is as happy as it sounds, while the other tracks were more comparable to darker songs.

I did not particularly like this track, and it disappointed me that the title track did not fit with the album. The contrast between the lyrics and the instrumentals of this track was too weird, to put it simply. It did not tie well with the rest of the songs. Just because a song has good lyrics and a good melody does not mean that those two components work well together.
General Thoughts on the EP
This album has stolen my heart and refuses to give it back to me. It might just be my new favorite album for the group. If I had to choose a favorite track, it would either be “Trust Fund Baby” or “Opening Sequence,” and I would give the entire EP 4.5/5 stars. It was amazing and had the potential to be perfect, except for the out-of-place feeling I got from “Thursday’s Child Has Far To Go.” While TXT usually opts for fluffy, bubblegum pop songs, such as “Cat & Dog” or their debut song, “Crown,” these dark chapters are still wonderful. TXT has again produced impressive tracks, and I can’t wait to see the next chapter in their story.