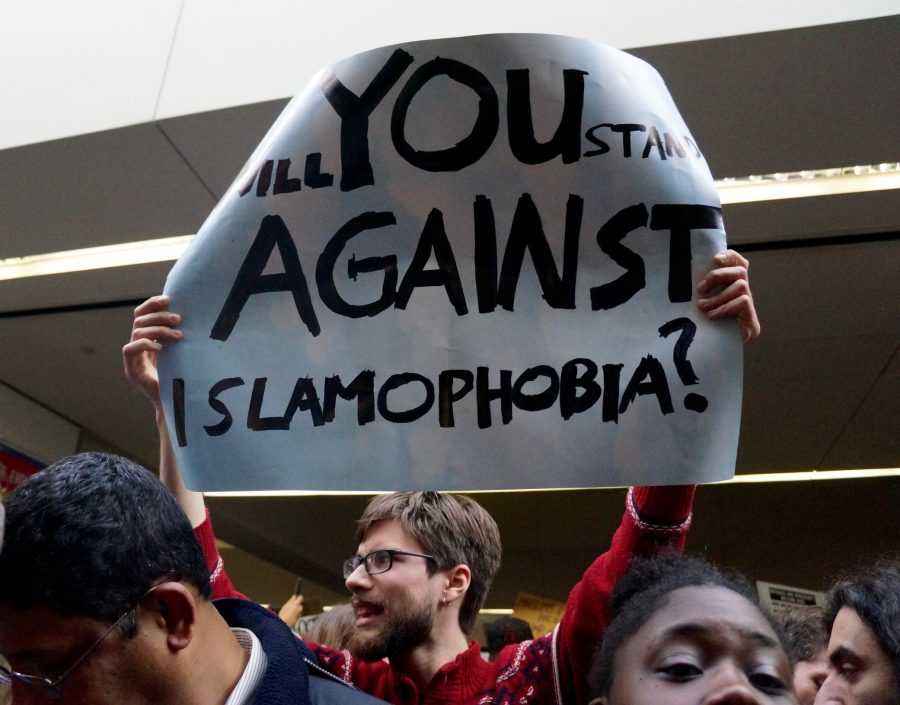 A man held a sign promoting the acceptance of Islamic immigrants.

Protesters returned to San Francisco International Airport (SFO), on Jan. 29, for the second consecutive day to protest the Trump Administration’s ban on immigrants and travelers entering the country from seven predominantly Muslim countries.

Protesters filled the inside of the airport’s international terminal starting at 6 a.m. and continued to fill the arrival area with chants and music promoting diversity and requesting the release of detained travelers.

Many chants stressed the importance of immigration in a country like the United States, where most immigrants come to seek refuge and pursue better opportunities for their families.

According to Newark citizen Tran, immigrants today deserve the same opportunities she and her family did when they emigrated from Vietnam. (Tran did not want to release her last name).

“We came here for an opportunity, and they deserve the same one. It’s not right to separate based on what country you’re from. We all represent the United States,” she said.

For many protesters, the ban affected daily life and the lives of their families.

“My friend just arrived back home from Iran and was detained. She is six months pregnant and had to be rushed to the hospital after hearing the news about the ban. They were shadowed by immigration officers at the hospital until the paperwork was in order and they could be released,” said Bay Area resident Leily V. (Leily did not want to release her last name).

In order to help detainees and their families, lawyers, both for pay and pro bono, offered their services around the terminal.

“People arriving are getting detained because they don’t have the right immigration status to enter the United States. In order to help them, we have to physically be able to reach them, so we’re here to help,” said Bay Area lawyer Smitha.

The overall feeling of the protest was optimistic as event coordinators periodically announced the release of detainees.

“The elderly Iranian couple who were shamefully detained have now, because of people power, been released,” said Alliance of South Asians Taking Action (ASATA) member Thenmozi Soundararajan over the loudspeaker.

Others had a more realistic view of the administration’s ban and federal judge Ann M. Donnelly’s temporary stay.

According to Mill Valley lawyer Margaret Moody, the stay is unrealistic.

“The 90-day provision is not realistic because countries need to provide specific documentation on the immigrants leaving their country, but those countries are unwilling to provide this documentation. The United States knows this and, as a result, the ban is permanent,” she said.

As the protest moved from the arrival area to the security gate, tensions rose between protesters and police officers. Blockade gates separating protesters from the security checkpoint were pushed back and forth as protesters aimed to shut down security.

However, despite the officers’ attempts to control the crowd, airport officials condoned the protesting.

“We are also making supplies available to travelers affected by this Executive Order, as well as to the members of the public who have so bravely taken a stand against this action by speaking publicly in our facilities,” airport officials said in a public statement.

While the ban is seemingly indefinite, protesters seemed determined to make a difference in the next four years.

“This is the war we are in for the next four years. This is the last gasp of white supremacy,” said Soundararajan.

President Donald Trump signed an executive order, on Jan. 27, banning nationals of seven Muslim-majority countries from being able to enter the United States for at least the next 90 days.

The executive order suspended the entry of all refugees for 120 days and also indefinitely bans the admission of those fleeing from war-torn Syria.

According to CNN, the order bars all people originating from Iraq, Syria, Iran, Libya, Somalia, Sudan, and Yemen from the United States since those countries were named in a 2016 law concerning immigration visas as “countries of concern.”

Our country needs strong borders and extreme vetting, NOW. Look what is happening all over Europe and, indeed, the world – a horrible mess!

As described by the White House, the order is considered to be a series of strict new measures to prevent terror acts in the United States.

Tracy Fetter, a San Francisco resident said, “I am completely and utterly appalled that the government is going down such a horrible, and maybe even, fascist path.”

Professionals in government agencies hurry to try and grasp an understanding of the new regulations passed as refugees who happened to have been mid-flight when the order was signed have been detained at the U.S. airports that they landed at.

According to The Telegraph, the Trump Administration managed to avoid the document from having had a formal review by National Security Council lawyers. Along with that, they failed to consult the Department of Homeland Security, State Department, or the Justice Department, who would all eventually be the ones in charge of executing the order.

Originally, it was said by the Department of Homeland Security that these restrictions would only affect people from the seven countries and not those with lawful permanent residence in the United States or green cards.

However, the implementation of the order was not made clear, so border patrol had started to also ban green card holders from being able to enter the country after having landed from their flights.

Moustafa Elattar, a Muslim immigrant who has lived in the Peninsula for 16 years said, “I am an American citizen, I have a job, I pay taxes, and I am just like anyone else. I am Muslim, but I am not a terrorist.”

This ban has sparked controversy all over the United States causing many to come together to resist the order by protesting at airports all over the country.

Sabiha Basrai of Alliance of South Asians Taking Action, who was at the protest at San Francisco International Airport said, “The Alliance is here to stand in solidarity with all of the immigrants in the Bay Area and all over the country. This doesn’t affect [the Alliance] directly but we are here because we need people to keep [the] pressure on until we get justice.”