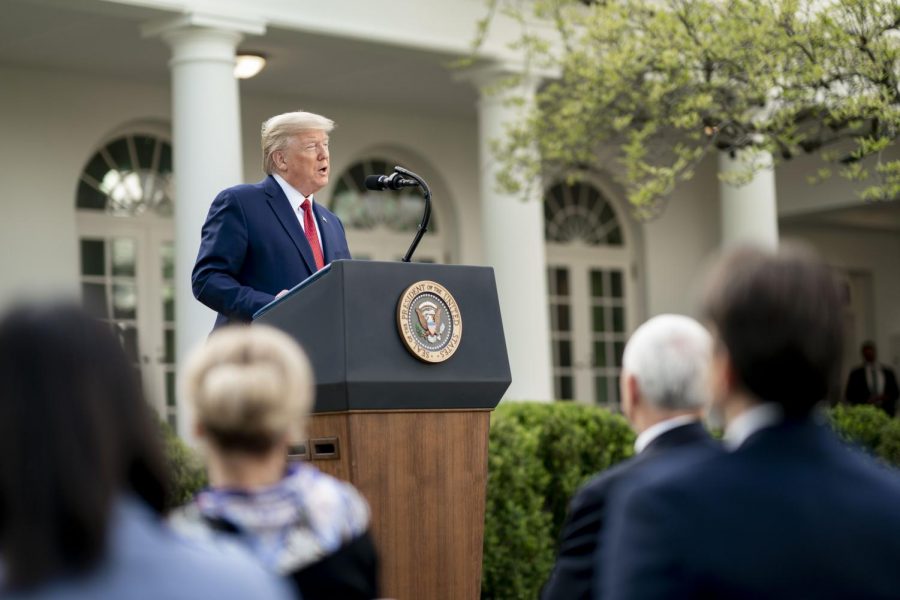 President Donald Trump speaks during a White House Coronavirus Task Force briefing at the White House, in the Rose Garden.

On Sunday, President Donald Trump announced that federal guidelines for social distancing will remain for another 30 days, and may last until June if necessary.

The guidelines advise people to avoid restaurants, bars, or any gathering with ten people or more, and to only make outings for “essential” activities. However, the precautions in place differ by location; some counties and states have issued “shelter in place” orders that must be followed.

215 million Americans are estimated to be affected by stay-at-home orders issued.

On March 24, Trump initially said he would like to see the country “reopen” for business on Easter. He then conferred with Dr. Deborah Birx and Anthony Fauci, two healthcare professionals on the White House Coronavirus Task Force, who showed current COVID-19 models.

So far, the death toll in the U.S. has doubled in two days, the virus surpassing 2,000 deaths Saturday evening, according to the New York Post. Expectations will be much grimmer if people do not follow the orders and guidelines put in place.

Trump later said in a news conference on Sunday, “During this time, it’s crucial that everyone follows the guidelines, the better they’re followed, the faster this whole nightmare will be over.”

Yet, Fauci, the director of the National Institute of Allergy and Infectious Diseases, said the crisis will get worse before it improves, especially with the severe shortages of supplies in hospitals.

According to CNN, hospitals across the country are expected to run out of beds in the next two weeks due to rising caseloads. Bill de Blasio, the New York City Mayor, said that his city only has enough supplies to last one week.

“We have enough supplies to last us to Sunday, except for ventilators. We are going to need several hundred more very quickly to get through this,” de Blasio said.

During the extension announcement, Trump claimed that many American companies are producing ventilators, so the U.S. will soon have enough to send to hard-hit Europe as well.

“We’re going to spend approximately $100 million worth of surgical and medical supplies to Italy, France, then Spain, where they have tremendous problems, and any other countries we can,” Trump said.

According to The New York Times, Trump’s claim indicates that shortages of ventilators, surgical masks, and other personal protective equipment will soon end, repeating his claim that the government has 10,000 ventilators in reserve.

“I’m very proud, it’s like a miracle the way we’ve all come together, and I think we’re going to be in very good shape,” Trump said.