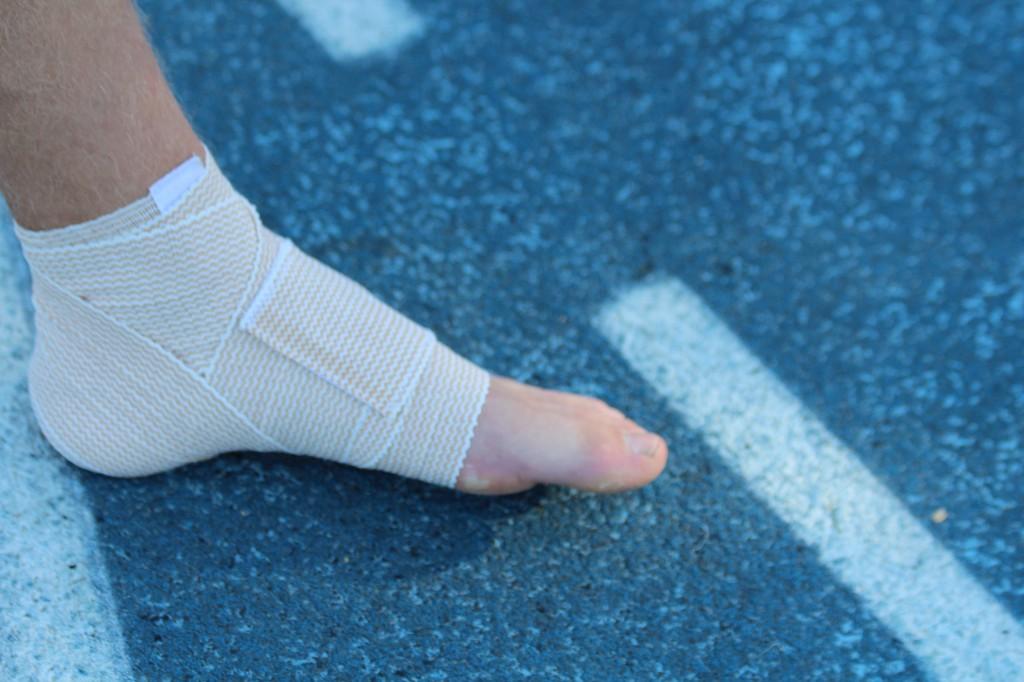 Boys Varsity Cross Country Runner Franklin Rice twisted his ankle, injuring it further by continuing to run on it.

“Just finish this race.” This is what Boys Varsity Cross Country runner Franklin Rice thought as he forced himself across the finish line on an ankle he had injured days earlier. After twisting his ankle playing ultimate Frisbee, Rice continued to play rather than sitting out. He said, “I was enjoying myself so I decided to keep playing.” Whereas he may have recovered for his next cross country meet if he had rested his ankle, he was unfit to participate when it came time for his event. In the pressure of the situation, he decided to race anyway. Rice said, “I kept running and suffered the consequences. Trying to be tough and run off the pain came back to bite me and now I’m gonna be out for a [while.]” This is the outcome of continued use of an injured body part. As an athlete, it is important to be able to distinguish between soreness and acute pain. One can be worked through, but the other can put an athlete out for weeks if not the entire season. Soreness while working out can be a sign that one’s body is developing. For Carlmont student athletes, who practice up to six days every week, muscle soreness is to be expected. “The issue is when you get a pain that’s recurring. If it comes back after you think it’s gone, then you have a problem,” said Rice. These chronic issues most often stem from continuing to play or returning too soon with an injury, as Rice did. Carlmont Athletic Trainer Jessie Little said, “If you play with an injury, you are making your body work harder. [It] will be compensating for the issue and not healing. Every time you reinjure yourself, you start the healing process over again.” In this respect, it is wiser to rest the injured body part, take care of it, and get back to playing. To determine whether an injury is something to rest or work through, JV Girls Basketball Assistant Coach Jackie Nelson said, “Immediately try to walk it out, but don’t work it too hard. If it doesn’t get better, take more time off.” If an athlete does sit out, Nelson said, “Continue training to keep the other parts of your body fit, or you won’t come back 100% like a professional athlete.” Nelson generally advises continuing to play on a minor injury, but only if it shows improvement after walking around and if the athlete has “full motion” of the body part. She still said, “Be a little bit protective of that spot.” Rice is determined to get back to running cross country with his team as soon as possible, but he has learned that it is worth sitting out for a day or two after an injury rather than being benched for much longer. During practice, a teammate called over to ask why Rice was not running that day. He shouted back that he had twisted his ankle and said, “Give me a week or so.”