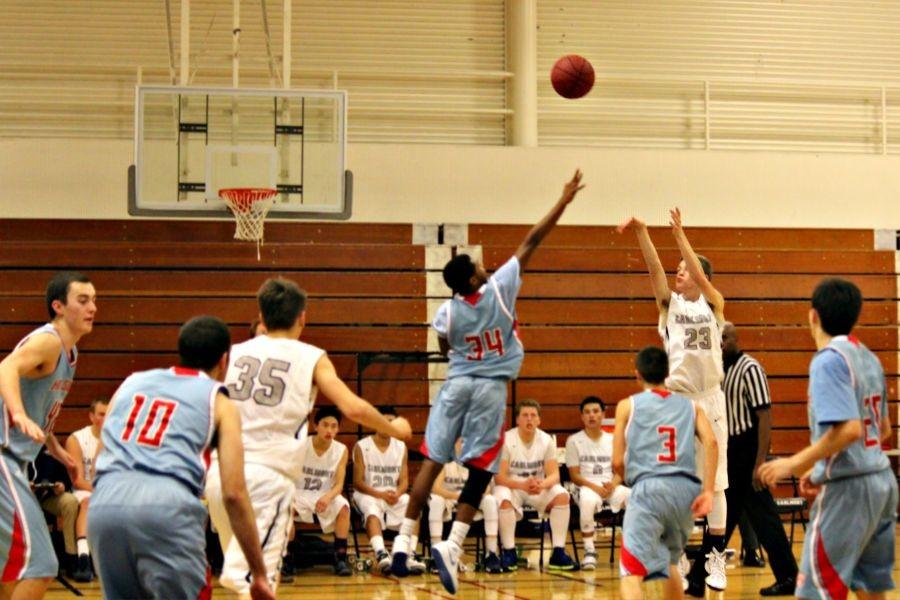 Junior Andrew Carlsen sinking a 3-pointer in the game against Hillsdale.

Senior Joe Rodriguez and sophomore Jacob Lloyd both sustained minor injuries during the game, but were able to quickly recover and both continued to play.

Spirits were high on the boy’s varsity basketball team prior to their 38-58 loss against Hillsdale on Jan. 14.

Junior John Hobbs said, “[Carlmont’s] games against Hillsdale have always been close. I’m excited because it’s the beginning of the season. This will be our third official game of the season.”

While no players said they planned on winning, there was a confident atmosphere from Carlmont upon entering the game.

“The game will go well if we’re able to successfully run our offense against their zone, because their zone is really good at limiting teams shooting from the perimeter,” said junior Andrew Carlsen.

“I think the game will go well, we just have to be able to break down their zone and run our offense,” said junior Kyle Ramos.

The first quarter of the game did not end in favor of the Scots, when Hillsdale started the night off with a 14 point lead against Carlmont, 17-31.

The Scots scored some more to help close the point gap in the second quarter, but Carlmont was still down 11 points, then losing 22-33.

“I think that we started off slow and they were able to jump out to an early lead. We never really were able to recover,” said Carlsen.

The players looked more tense in the third quarter, pushing themselves harder. Junior Tyler Brandenburg was able to gain the ball from Hillsdale’s grasp numerous times, but failed to score even after he made it all the way down the court.

In the last 20 seconds of the third quarter, both Carlmont and Hillsdale managed to score, with Carlmont still losing 25-42.

The final quarter was aggressive and fast-paced, both Carlmont and Hillsdale attempting to raise their scores to secure the lead.

“Our defense was better in the second half, and we were able to stop their fast breaks,” said Carlsen.

After the game, Hobbs said, “Overall, we didn’t play a great game as a team, but we did manage to get a decent amount of points. We struggled mostly with our defense, specifically our close outs, which lead to Hillsdale driving and kicking it back out.”

Wednesday night’s loss now brings the Scots to one win and two losses in league play.