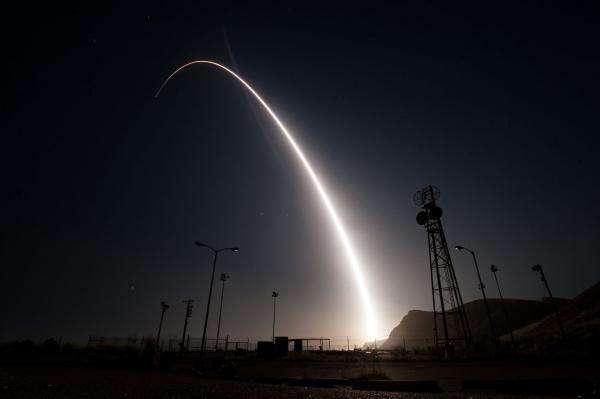 Just minutes after midnight on April 26, 2017, the California's Vandenberg Air Force Base commenced a test launch of its Minuteman III ICBM. As U.S. tensions with North Korea continue to heighten, military strength is becoming increasingly important.

On Wednesday, April 26, the U.S. Air Force conducted an operational test of one its Minuteman III intercontinental ballistic missile (ICBM).

The missile was launched 12:03 a.m. from California’s Vandenberg Air Force Base (VAFB), 130 miles northwest of Los Angeles.  The missile traveled more than 4,200 miles and landed in a test range in the Kwajalein Atoll, which is part of the Republic of the Marshall Islands.

The purpose of this launch was to “verify the accuracy of the Minuteman missile system,” according to the Air Force Global Strike Command.

According to the VAFB launch schedule, The Vandenberg Air Force Base is set to launch another Minuteman III missile on the morning of May 3. This test launch will be the third one hosted by the VAFB this year.  This test came as a result of heightening tensions between the United States and North Korea. Despite recent failures, North Korea is accelerating its missile tests to send a message to President Donald Trump and the United States.

According to Trump, North Korea’s nuclear aspirations is a foreign issue that “will be taken care of.”

These recent missile tests have faced controversy. Opposition in part stems from uncertainty over the Trump administration’s zeal in tackling the North Korean regime.

“As a world superpower, the United States has a moral obligation to set an example for the rest of the world and practice diplomacy, not aggression. Therefore, I don’t see a point in relying on weapons like the missiles recently tested in Southern California,” said Mary Dominguez, a California resident.

However, the many Americans have a different view. According to a Fox News poll, 53 percent support military action to thwart North Korea’s nuclear program.

Warner North, a Ph.D. in Nuclear Physics, is in favor of America’s belligerent approach towards North Korea and believes the military’s arms enhancement is vital in preserving its power and reliability.

“It’s been part of our normal defense preparedness for the last 50 years,” said North, referring to Vandenberg’s recent ICBM tests, “And it’s been an incredibly effective deterrent from the world plunging into another World War.”

North Korea has vowed to not stand down.  It is only a matter of time before the regime proliferates its efforts against the United States and its allies, and the U.S. Military is going great lengths to prevent such from happening.