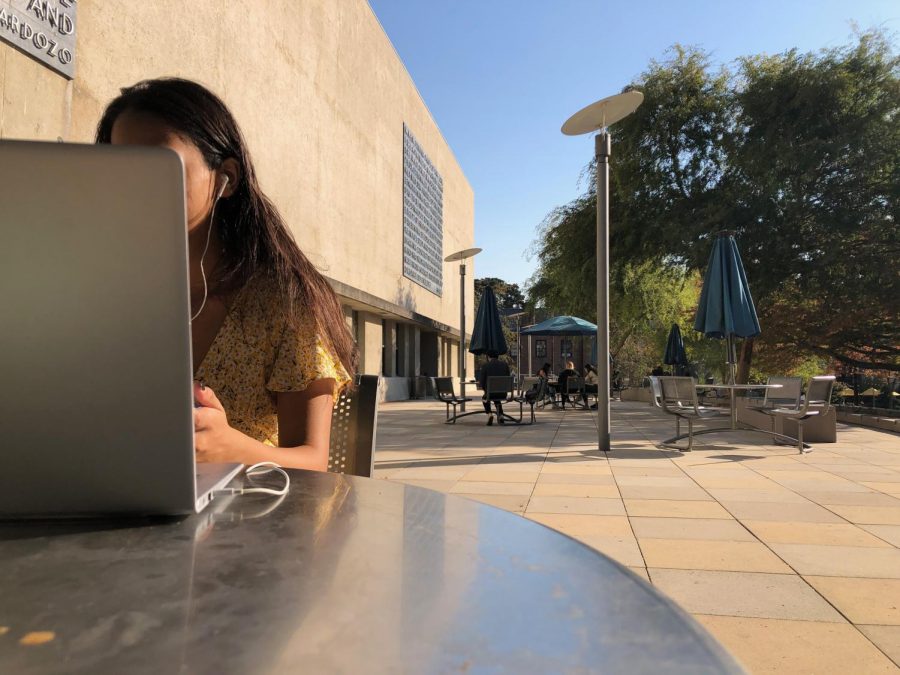 A freshman at the University of California, Berkeley studies for her classes in front of the Berkeley Law School.

First-year students at the University of California, Berkeley (UC Berkeley) feel a difference between preconceived ideas of college life and reality.

As a result of the COVID-19 pandemic, UC Berkeley took several precautions that significantly altered college life for students, including limiting on-campus housing for first-year students and not allowing students who live in dorms to have a roommate. All classes are held virtually; social gatherings, such as parties, are prohibited on campus. Despite these drawbacks, freshmen Allie Ayers and Caleb Metzler, who both live on campus, have found socialization to be less daunting than they feared.

For Ayers, the massive campus has allowed for meeting spots where she often studies with classmates. She also runs with members of the Strawberry Canyon Track Club or other non-member friends. Alternatively, Metzler has spent a great deal of time getting to know his dormmates, and both freshmen have expanded their circle of friends while remaining connected to their Carlmont classmates.

“I had people [at UC Berkeley] that I already knew from Carlmont, so at first we depended on each other and introduced each other to people,” Ayers said.

Since pandemic restrictions also prevented students in dorms from having roommates, Metzler wondered if living on campus this year would even be worthwhile, since he would miss out on a crucial component of the college experience. Many students, including Ayers, had also arranged to share a room with their friends.

“I kind of had an image in my mind of the dorms … I expected to be surrounded by a lot more people, and I think it feels very empty [in my room] at times,” Ayers said.

However, both Metzler and Ayers found the silver lining in their rooming situations by learning to appreciate their freedom and personal space.

On the other side of the spectrum, UC Berkeley freshman Hedy Mah’s social life has taken an entirely different route. Mah, who also graduated from Carlmont in 2020, opted to live at home rather than on campus, due to her family’s concern about COVID-19. Prior to the pandemic, she expected her social life at college to revolve around gatherings and parties. However, she has been unable to meet up with any students from UC Berkeley. Nonetheless, Mah has found other ways to take advantage of her freshman year from home, creating connections and new friendships with her classmates.

“There’s been a lot of Discord servers, and groups like Instagram groups, so those things offer a lot of support,” Mah said.

But dorms and social situations weren’t the only things plaguing freshmen. With UC Berkeley being a top-tier school, the three freshmen anticipated an academically competitive environment, especially because they are all majoring in STEM subjects: science, technology, engineering, and math. Instead, they found it to be a friendly, supportive, and cooperative atmosphere.

“It’s all people wanting to help each other do well and succeed, and I think that’s been a relief,” Metzler said.