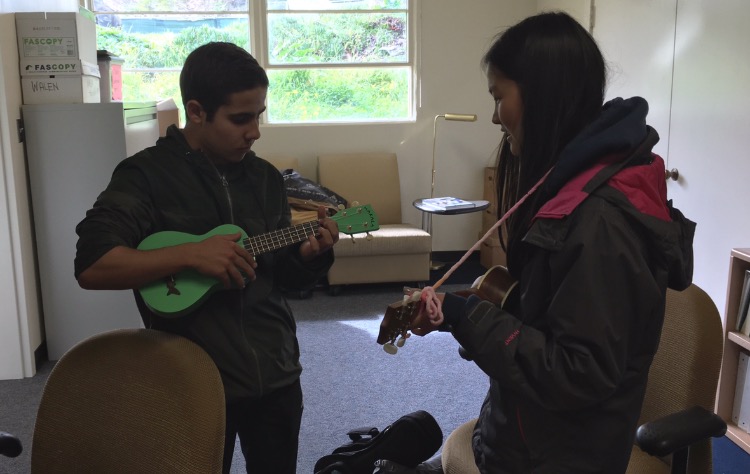 Synchronized strumming, voices in harmony, and a steady drum beat can be heard on Thursdays at lunch in the back of the student union, but it isn’t the radio. The Ukulele Club, overseen by advisors Kai Orozco and Jaime Simpson, is simply a group of students with varying levels of musical talent who gather to sing, play the ukulele, and occasionally eat cookies.

“I joined the club in my freshman year because I already loved ukulele and I was super excited by the fact that there was this group of people who loved it too, and it’s not a very common thing so it’s cool to have that,” said Kyle Jung, a senior and co-president.

The feelings of passion and devotion to the instrument, as well as to the group itself, are not only reflected in club officers but in other members as well.

Sophomore Willy Castro-Ramirez said, “I joined Ukulele Club because the atmosphere is great and playing ukulele is crazy awesome. I most definitely encourage other students to join us.”

Miguel Encarnacion, a junior, also enjoys the vibe of Ukelele Club but in a different way.

“It gives me the opportunity to be with other people who like to play the ukulele and I can work on my skills,” said Encarnacion.

From the variety of reasons members go to meetings, it is clear that students are finding a different kind of satisfaction from being in Ukelele Club that they don’t find in other circles.

It appears to have an uncommon mission. On the Carlmont Clubs List for the 2016-2017 school year there is only one club, other than Ukulele Club, of the 132 listed that focuses on playing instruments simply to enrich passion and enhance skill.

“It’s fun because I play the ukulele myself and it’s cool to be with a bunch of people who play ukulele too. Plus, sometimes it’s the only thing other than playing sports to do on Thursday. And I think it’s better than sports,” said freshman Bella Juan.

Adviser and club creator Orozco agrees that being part of a club like Ukelele Club can be an important shift from usual activities.

“Music is a great way to manage anxiety and stress, so this is a really important club,” said Orozco.

In a demanding environment, like school tends to be, this alternate mode of stress relief has the potential to be extremely beneficial to student life in terms of improving mental health and exposing kids to new hobbies.

Ukelele Club currently has close to ten members showing up consistently to their 20 or so meetings so far this year, and they are only moving forward. Namely, the club is going to be performing an originally arranged medley at the Heritage Fair on Feb. 24.

Orozco said, “There’s a multicultural, togetherness aspect of ukulele; it’s a great way to bring people together. It represents unity and peace. Music is life. There’s nothing more important than that.”