Ukulele Club strikes a chord with its members 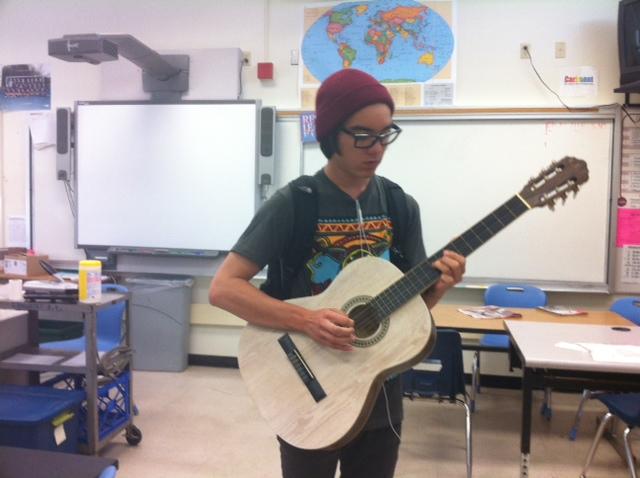 “I just went in, played along with them, and it was fun.”

This is a common experience among Ukulele Club members, as said by senior and president of the club, Liam Mercado.

Ukulele Club was created about two years ago by a large group of students. “It kinda just happened,” said Drew Jung, one of the founders of the club.

Jung also started playing ukulele by chance. “I learned it over the summer when I first got an iPhone. I saw that there was an app about learning how to play ukulele and it was just a blast.”

As for other members of the club, many have a large range of skill levels, ranging from beginner to advanced. “We have people who come in and this is the first time they’ve picked up a ukulele, to people who seem professional, like [senior] Alex Kumamoto,” said Mercado.

Those who are new tend to get help from more experienced players. Mercado said, “I don’t teach people full on how to play, but I try to teach people who are starting out how to do some more  advanced things and develop their skills. It’s kind of what I do here.”

One member who was taught in the club is junior Emma Farrington. She said, “I had heard about ukulele from a friend who graduated, but I hadn’t played until I came to this club. I came here and they gave me some songs to play. Learning has been really easy.”

Many members share the same reasons for enjoying the instrument. Mercado said, “The ukulele has a super bright sound, and everyone loves to hear it.”

Farrington said, “It just makes me happy and it’s really nice to hear.”

A typical meeting for club members can be varied, but often follows the same general routine. “Usually everyone’s doing their own thing for a while, but at the end we try to get together and play at least one song collectively,” said Mercado.

Although many students in the club are graduating this year, including Mercado and Jung, the club has a good vision for the future. “We’ve played at the Heritage Fair before, and we’re totally willing to do more stuff if it comes up.”