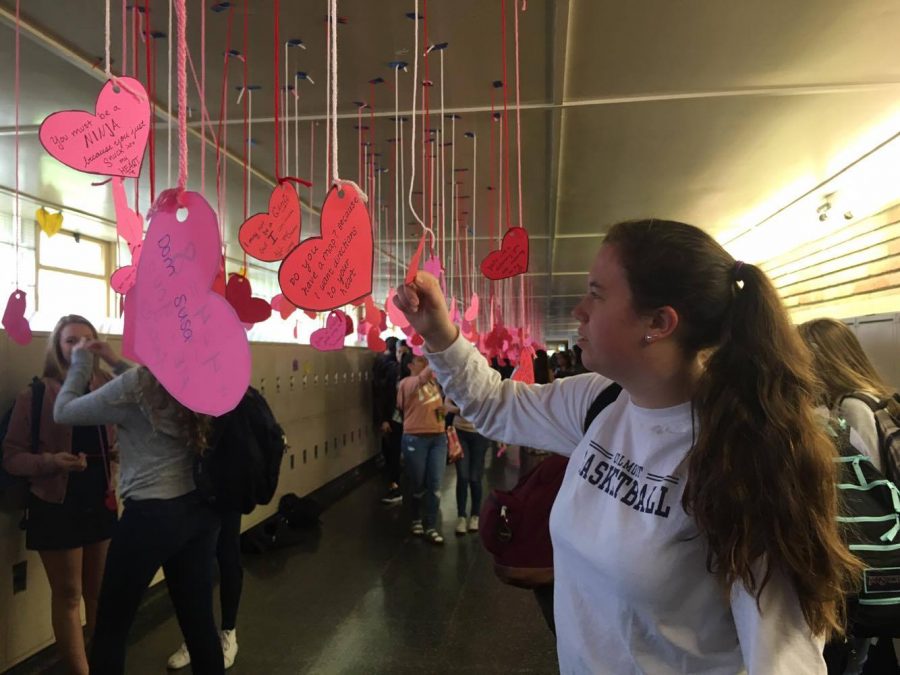 Chloe Kelly, a junior, reads the Valentine's Day notes in the hallway.

On Feb. 14, students were greeted with personalized, heart-shaped valentines hung in C-hall.

Since the beginning of the year, ASB has worked on this project to make sure that all students felt loved and appreciated on Valentine’s Day.

“We started to work on this project around October in order to make sure that it was as successful as it could be. Since there are around 2,000 students on campus, it took a lot of planning,” said Samantha Torres, a member of the recognition commission for ASB and a junior at Carlmont.

The tradition of hanging hearts in the hallways has been happening at Carlmont for three years and was started by a former ASB member. The project was created to help increase the love and happiness on campus and make everyone feel included in the holiday.

“This is our third time filling the halls with hearts on Valentine’s Day. It began with our supervisor from last year, and we took it with us this year because we believe that it’s such an awesome project. It’s a simple thing that makes a huge difference and causes people to instantly light up when they walk onto campus,” said Torres.

For many upperclassmen, seeing the progress of this project throughout the years has allowed them to feel more welcomed on campus.

“I think that the hearts provide people with encouragement and make people feel good about themselves. ASB did a great job on making everyone a valentine, which I know took a lot of time and effort,” said Seiya Mirande, a junior.

Many freshmen were excited to celebrate their first Valentines Day at Carlmont and surprised by the valentines from ASB.

“It was nice to know that everyone got their own personal message, which was thoughtful and made me proud to go to a school that supports everyone,” said freshman Kenna Kwok.

With this project, many believe ASB has created a positive atmosphere on campus and has encouraged more people to go out and spread the love.

Kwok said, “I think that doing this project every year would create an overall more positive environment on campus. Expanding this idea to other holidays as well is something I think ASB should look into in the future. The hearts have shown me the power that I have to make an impact on the school.”