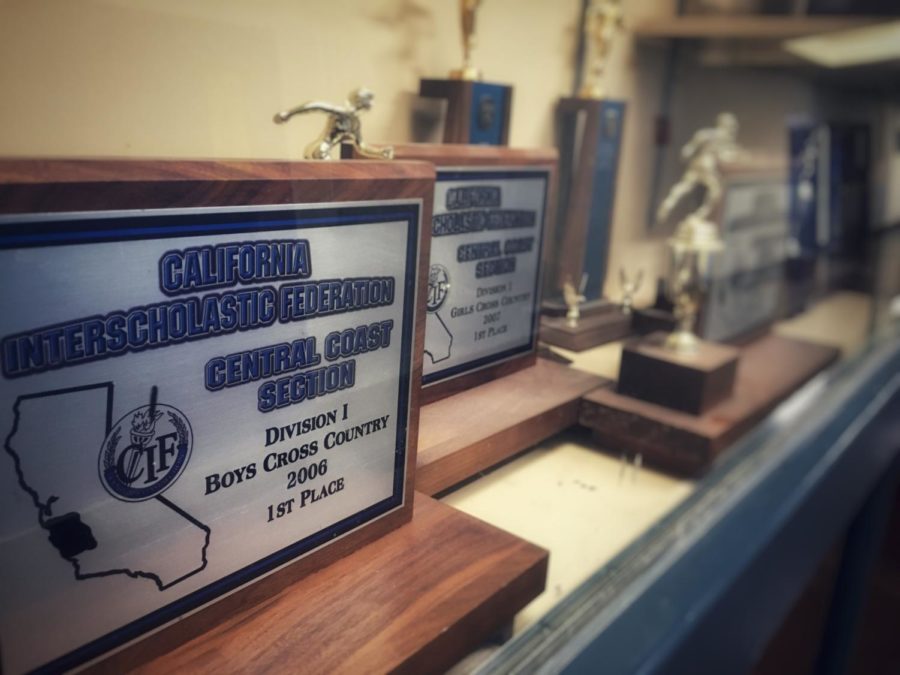 The Central Coast Section honors teams that do well with plaques like these, displayed in the trophy cases next to the Physical Education locker rooms.

The life of a coach is not an easy one.

One may wake up aiming to enrich the lives of students and end up falling short.

Rich Vallero, a varsity baseball coach and physical education (P.E.) teacher at Carlmont, knows this feeling all too well.

“Sometimes when you strap it on and go to work every day, you think that it’s a thankless position. At times you wonder even, ‘Why am I doing this? Am I making an impact?’” Vallero said.

It is not often that someone like this receives recognition for all that they do.

However, at the Central Coast Section (CCS) Baseball Championship, Vallero will receive just that.

Every year, CCS honors one coach per sport based on their contributions to their team both on and off the field.

Aside from coaching for at least five years at the varsity interscholastic level, coaches are nominated based on their maintenance of professional standards of conduct, general service to their respective sport, and their outstanding coaching accomplishments. Their additional contributions to the school and community, and ability to motivate and inspire others are also taken into consideration according to Jennifer Watson, an Assistant Commissioner of the CCS and overseer of the Honor Coach Program.

At their annual evaluation meeting, each CCS Sport Committee nominates coaches for the Honor Coach of the Year award. However, nominations can also be initiated by any coach, athletic director, administrator, or league commissioner, according to the CCS website.

Once Vallero was nominated, Principal Ralph Crame, PAL commissioner Terry Stogner, and athletic director Patrick Smith all had to sign the nomination form in approval according to Smith.

“From there you can include supporting evidence and letters of recommendation,” Smith said.

Along with his own letter, Smith enlisted the help of Crame, Henry Reich, pitcher and captain of the varsity baseball team, and Brad Sentman, an assistant coach for JV to write letters as well.

Whether it was intentionally or accidentally sent, Vallero received an email containing the names of the two finalists for the award, including himself, and the letters of recommendation that were written on his behalf.

“One of them was written by a senior off of this year’s team and […] it made me emotional thinking about the way that other people look at me,” Vallero said. “When you get a letter like that where someone’s putting their heart on the table saying how important you are to the community, the kids, and the school, it gives you a boost of encouragement. It makes me want to coach another 20 years when I see that I am making an impact.”

Reich meant every word he wrote.

“The fact that he didn’t tell the team about his personal accomplishment demonstrates how humble and grounded Vallero is. He never fishes for compliments from others because he knows in his heart how awesome it is to earn this award,” Reich said. “His dedication, passion, and work ethic are superior to any coach I have ever played for.”

When it came time for the Sport Committee to vote on which coach should receive the award, they chose to honor Vallero.

“The baseball committee chose him based on his reputation around the league as a coach who is doing it ‘the right way’ when it comes to emphasizing character and leadership above wins and losses,” Watson said.

Vallero will be brought down to the field before the championship game commences at the San Jose Giants Municipal Stadium. The announcer will then read a script about him and then Vallero will be presented with a crystal award, according to Watson.

Vallero has been around baseball since he was five, his grandpa being a scout for the Giants, and despite the award, he doesn’t plan to stop.

“I am in no way content. I’m going to continue to push forward even harder knowing that my efforts are being felt and even try to do more,” Vallero said.

His award certainly marks a turning point in his career, and although Vallero has been coaching at Carlmont for 13 years, he is only just beginning.