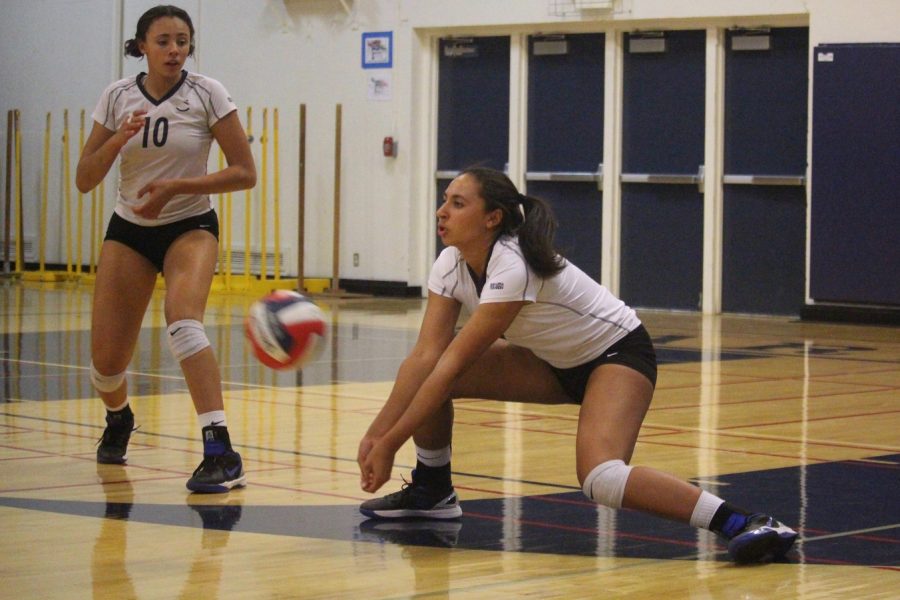 Freshman Morgan McClellan digs to save a hit from the opposite side of the net.

The gym is silent.

Tension is in the air.

Senior Makenna Twisselman hits the floor hard and gives a perfect pass to junior Sophie Srivastava. Srivastava sets the ball up to junior Maya McClellan who smashes it over the net winning the game for the Scots.

The rivalry continued between the two schools when Carlmont’s varsity girls volleyball won in three games against Sequoia.

“Going into this game I felt pretty confident. In our last tournament we beat Sequoia with a decent lead, I knew that we had the potential to do it again if we worked hard,” said Twisselman.

The Scots started strong in the first set against the Cherokees. However, their lead slowly dwindled as Sequoia fought harder. Carlmont held on and won the first set 25-17.

“At the end of the first game I think it was a bit of a wake-up call to us all as we had slacked off and began playing sloppy,” said freshman Alisha Mitha.

In the second the Scots continued their strong play at the start and built up a small lead. However, simple mistakes built up and the lead slipped away. Carlmont was able to close out the set winning 26-24.

“By the end of the second game we were all a little bit shaken up but we began to get our priorities straight and cleaned up our act,” said Mitha.

To end the third set, Twisselman gave a perfect pass to Srivastava who then gave a flawless set to Maya McClellan who ended the game with a kill over the net. Carlmont sealed the match over their rivals with a final score of 25-18.

“Going into this game I did not feel the greatest however as a team we came together and built up our confidence which led us to beat our rivals,” said McClellan.