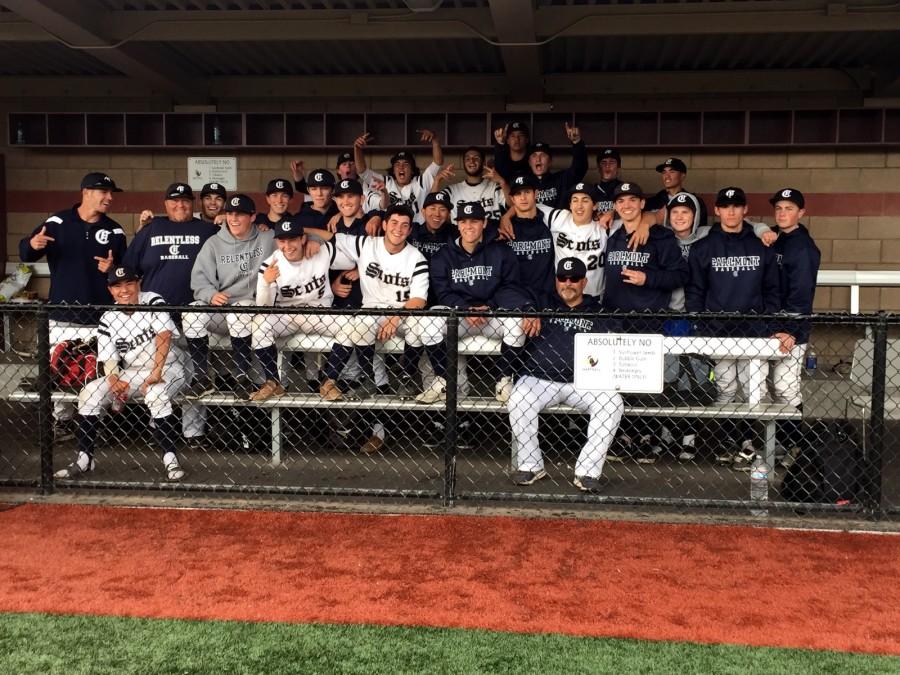 Provided by a Carlmont parent

The Scots pose excitedly after their 2-1 win against St. Francis.

Two outs. Seniors Aaron Pleschner and Alex Pennes are on first and second base. Sophomore Vinny Bologna is up.

“The pitcher seemed like he was getting out of the zone,” said Pennes. “That inning seemed like we wouldn’t have another chance to get the job done.”

Bologna hit a line drive to left center field, bringing in Pleschner and winning the game.

“That hit showed how relentless [our] team is, and even after 13 innings, we still had enough drive to finish it strong,” said Pennes.

The Scots were victorious over the Sharks in the bottom of the 13th inning of the Central Coast Section (CCS) quarterfinal game with a final score of 2-1.

The Scots scored their first run in the bottom of the third inning. Pleschner hit a sacrifice fly to center field and scored junior Tyler Brandenburg. The Scots led 1-0.

The Sharks did not give up the fight going into the fourth inning. St. Francis tied the game with a base hit to center field.

The fifth inning marked the beginning of seven scoreless innings.

The Scots and Sharks kept their defenses tight, but couldn’t get any runs on the board.

Junior Spencer Stewart pitched six complete innings with only one run allowed. In the top of the seventh, senior Ryan Giberton stepped up to finish off the game.

“I felt that as a team we knew we were going to pull away with the win, despite the fact that [St. Francis] had two phenomenal pitchers,” said Stewart. “We weren’t going to let that beat us. We deserved the win.”

And the win is what they got.

“Overall, I feel like we had a really good defense. [Our defense] backed me and Spencer up for 13 solid innings,” said Giberton. “When I pitched, I felt really good. My slider was on the whole game. The vibe that our team was giving me kept me going, and really showed that we are relentless,”

The Scots will advance to the CCS semifinals on Wednesday, May 27 at 7 p.m. at the San Jose Municipal Stadium.

“Wednesday is going to be another tough game, but we are a tough team to beat. We play relentless no matter what, even if it takes 13 innings,” said Stewart.