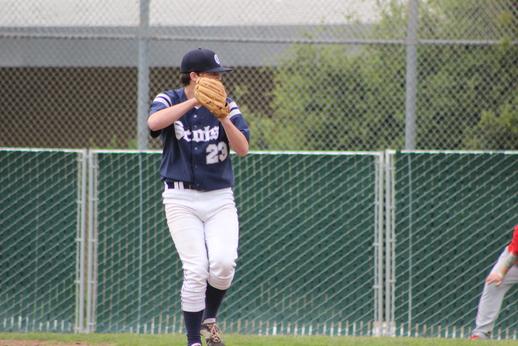 Senior Spencer Stewart goes through his pitching motion, trying to get the batter out.

Once the Scots got going, there was no looking back.

On Saturday, March 12, Carlmont’s varsity baseball team squared off against El Camino High School in a pre-season match up.

“Playing well in pre-season is important because it prepares you for the regular season. If we do well in the pre-season, the same success usually follows,” said head coach Rich Vallero.

After a scoreless first inning from both sides, the Scots struck first in the second inning with senior Spencer Stewart driving in a run off a base hit. In the third inning, with the bases loaded, the Scots were again able to capitalize. Sophomore Jordan Brandenburg hit a single down left field to drive in another two runs, making the score 3-0.

After both teams went hitless in the fourth inning, the Scots erupted with a huge fifth inning. With runners on second and third, junior Vinny Bologna crushed the ball deep into center field, clearing the fence and making the score 6-0.

The Scots were not done yet, as they were able to bring home seven more runs. El Camino finally was able to end the inning but not before allowing ten runs to the Scots.

The Scots were also superb defensively. With the defense lead by starting pitcher Spencer Stewart, the Scots held the Colts to zero hits. Only two El Camino players reached base in the entire game.

“Even though we scored fourteen runs, I think the highlight of the game was Spencer’s no-hitter,” said sophomore Brandon Takimoto.

After the fifth inning, rainy weather started to come into effect. The Scots opted to keep playing, but the Colts decided to end the game early. The final score 14-0 with the Scots winning.

“I think that this was our best game all season because of how well we played both offensively and defensively,” said junior Vinny Bologna.

This win improves the Carlmont overall record to 5-2. The Scots’ next game is on Wednesday against Burlingame High School.