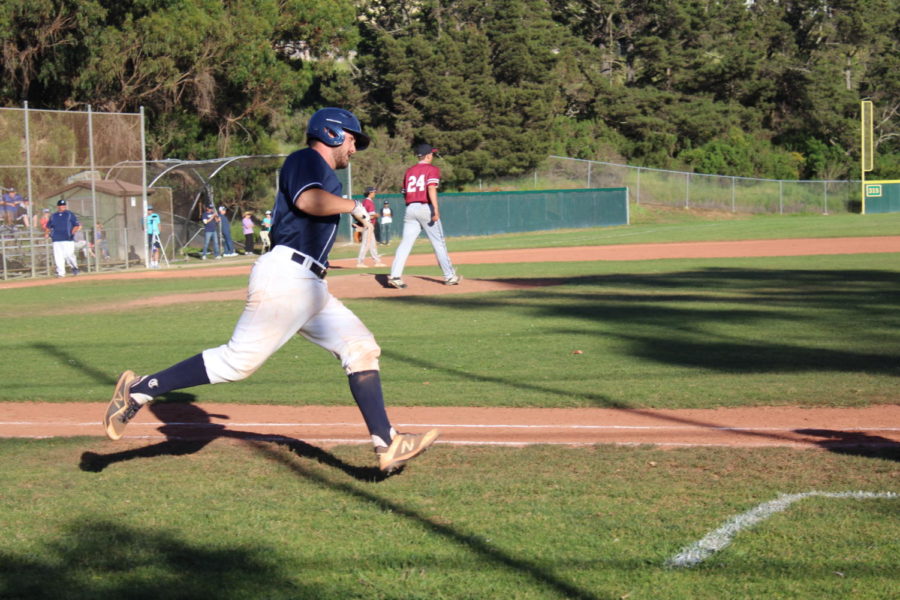 Jack Greco, a senior, hits a leadoff single to start off the bottom of the sixth.

On the warm afternoon of Friday, May 3, the Carlmont Scots beat the Sacred Heart Prep Gators with a score of 15-5.

“They played great today. The bats were working, the defense was working, Aiden [Woodring] the left-handed pitcher did well for five innings, and we shut them down,” said Jesús “Jesse” Velez, a coach.

In the fourth inning, the Gators scored a run, while Carlmont scored three runs. J.P. Avila, a sophomore, stole a base with one out in the inning, forcing the Gators to meet at the mound.

During the fifth inning, Sacred Heart Prep scored no runs, but the Scots were more successful and scored five runs, all of which were batted in.

The sixth inning was by far the most interesting. Sacred Heart scored no runs once again. Jack Greco, a senior, started off the inning with a single. Greco scored on an RBI. Later in the same inning, Tyler DeSmidt, a senior and third baseman, came up to bat with the bases loaded and hit a grand slam, making the score 15-2.

“It felt good [hitting a grand slam]. Our team had been playing well up to that point, and the coaches had been helping us out and putting us in good spots, and it just felt good to finally capitalize and kind of put an end to the game,” DeSmidt said.

Only Sacred Heart batted in the seventh inning because the Scots were playing on their home field and had already sealed up the win. Sacred Heart did score three runs, but they were still too far behind to make a comeback. The Scots ended up scoring 15 runs with 13 hits and only two errors. In contrast, the Gators only scored five runs with seven hits and one error.

The Scots are approaching the end of their season with only three games left to play. According to some players, the team has greatly improved from the beginning of the season.

“Team chemistry is going to help with our playing because we want to be out there. We’re supporting each other. We’re always loud. We’re always out there working hard,” said Logan Snow, a senior.