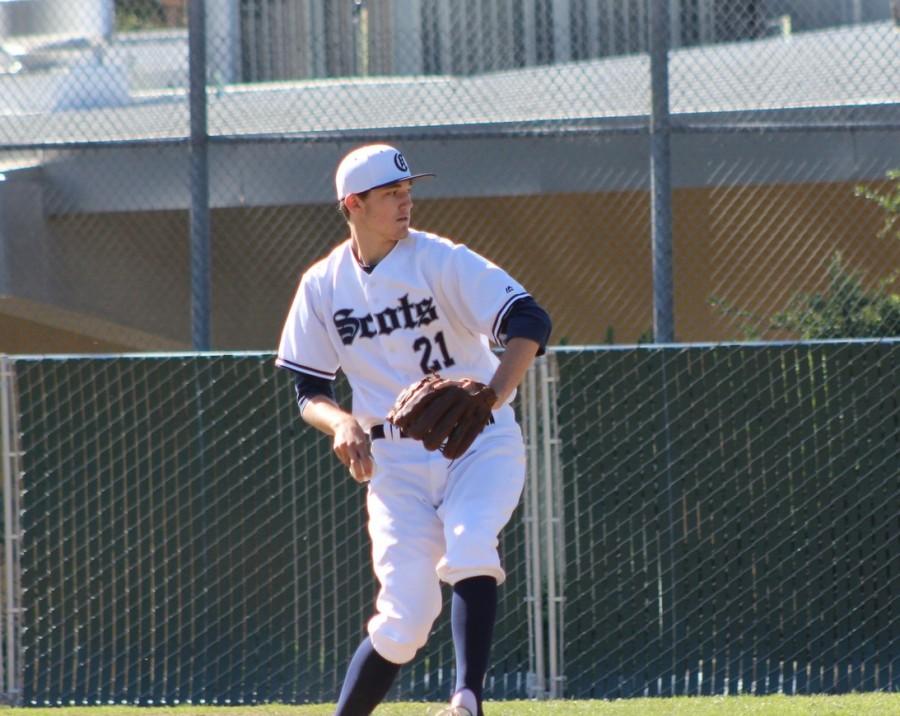 Pitcher Matt Reiley, a junior, goes through his pitching motion. Reiley allowed just one hit against the Mustangs.

On Friday, March 25, Carlmont’s varsity baseball team took on Capuchino High School in the second game of a doubleheader.

Defensively, the Scots did not let the Mustangs get anything going. Junior Matt Reiley dominated the mound, pitching all seven innings and allowing just one hit to the Mustangs.

Run support was not an issue either, as the Scots were able to drive in runs from the get-go.

After both teams went scoreless in the first inning, the Scots struck first with a deep solo home run from sophomore Jordan Brandenburg. In the bottom of the third inning, the Scots again were able to capitalize. With the bases loaded, sophomore Grant Norman drove in a run from a hit by pitch. Later in the inning, senior Connor Loucks drove in another run off a base hit, making the score 5-0.

“Our mindset throughout the game was to be relentless. Even though we were winning by a lot, we never let up,” said Brandenburg.

The Scots, adding insult to injury, tacked on another run in the sixth off another home run from Brandenburg, his second of the day.

That was all that the Scots needed offensively as Reiley was able to finish the one-hitter. The final score was 6-0, with a win for Carlmont.

“We only beat [Capuchino] by one the first time we played them, so it feels good to be able to shut them out today,” said sophomore Josh Fong.

With this win, the Scots improve to 4-0 in league play and 10-2 overall. Midway through the season, the Scots are in a good position to win their fourth straight Bay PAL title.

“We’re in the driver’s seat to win PAL this season, so as long as we keep playing like we have been, the title should be ours,” said head coach Rich Vallero.

The Scots will look to maintain their perfect league record when they face the Menlo-Atherton Bears on Wednesday, March 30.