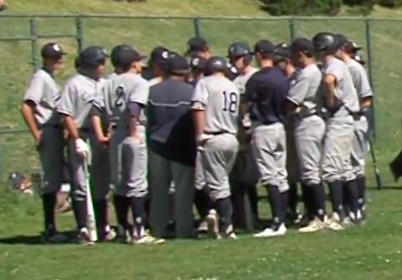 The varsity team has a pre-game speech before a league showdown with the Terra Nova Tigers.

This is the word that comes to mind when asked about varsity baseball’s May 25 showdown with Saint Francis in 2016.

The game was played at the San Jose Giants Stadium, and the winner of the game was to play for the Central Coast Section title. The game ended 3-2 with Saint Francis coming out on top, ending Carlmont’s quest for a CCS title.

This was the second year in a row that Carlmont had won their league but fell short in the semi-finals of the CCS tournament. It was a tough loss for the team, who had been working hard since November of 2015 to be champions of the bay.

The game marked the ending for five Carlmont seniors including the starting shortstop, catcher, and their ace pitcher.

However, as it always does, the season rolled back around again in February of 2017 with a new squad but the same goal as they had the previous year.

The road was going to be tough for the varsity team losing key members of the team, but they remained optimistic and still believed they could have a successful season.

“We knew that we still had the players and coaches to have a good year. We also had lots of varsity and winning experience from our returners,” said Josh Fong, a junior who plays right field.

Their goal of winning CCS seemed feasible as the season developed, with the team sweeping league opponents such as Terra Nova, Hillsdale, Burlingame and Woodside.

Their success was due to key players stepping up and having big years. Sean Prozell, a senior and the ace of the team, was untouchable throughout the season posting a 0.38 earned run average with eleven wins and no losses. The team also solid seasons from various hitters who hit above 300 in the season.

“We were successful because we played loose, and we had a lot of talented guys who had worked hard,” said Reiley, a San Jose State baseball commit.

It was truly a dream season for the Scots. They won their league for the fifth straight year and ended the season as the 6th best team in the Bay with a 22-4-1 record.

“Best team I have ever seen in my time here,” said coach Richard Vallero.

Now, as the regular season is over, the team looks to erase the past and overcome the challenge that they faced. They are looking to win the CCS title, and finally, claim the spot of the top team in the bay, a feat they have fallen short of for two years.