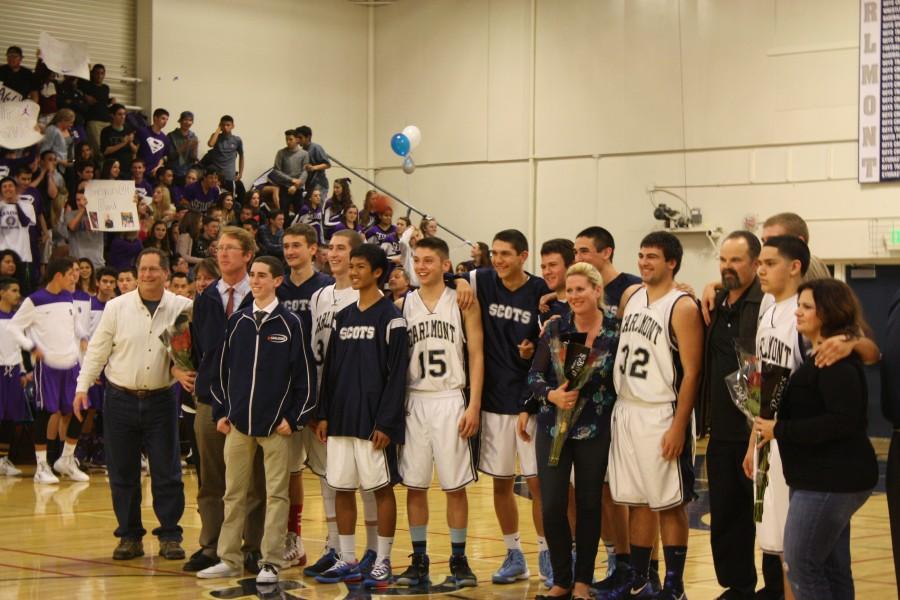 The Boys Varsity Basketball team smiles for a picture before the game.

The Boys Varsity Basketball team finished their last game of the season against Sequoia High School on Feb. 13.

The Screamin’ Scots, the cheerleaders, and the crowd stood by the Scots’ side as they finished with a 45-38 loss.

Seniors Christian Torres, Joseph Hamdun, Michael Costello, Michael Scallan and junior Joe Rodriguez started the game with intensity as Scallan opened up with a two-pointer. Carlmont High School whipped the ball back and forth along the three-point arc, looking for open passes and shots.

Screamin’ Scots and Sequoia brought a lot of energy to the game as both schools cheered on their teams. Hamdun scored a basket for Carlmont, followed by a three-pointer from Sequoia. Sequoia was one point behind at 4-3 when sophomore Glenn Smyth stole the ball, went for a lay-up, and pulled a foul.

Smyth made one out of the two free throws, pulling Carlmont ahead 5-3. Halfway through the first quarter, Sequoia dunked the ball, tying the game 5-5. Torres scored a three-pointer, putting Carlmont in the lead at 8-5.

With the assist of Costello, Scallan followed up Torres’s three-pointer with a basket, pushing Carlmont forward 10-5. With less than three minutes left in the first quarter, Sequoia scored a three-pointer, but Carlmont pulled ahead with two baskets.

Scallan drew a foul with 13 seconds left in the quarter, scoring both free throws. The first quarter ended with Carlmont in the lead at 15-8.

Similar to the first quarter, the Scots opened up the second quarter with high spirits as Costello scored a two-pointer. Carlmont was unable to score for five minutes while Sequoia scored eight straight points, trailing by one point at 17-16.

Junior Thomas Gifford scored a basket that allowed the Scots to pull away from Sequoia, but was followed with a free throw from Sequoia.

With 15 seconds left in the first half, Sequoia stole the ball and made a fast break, but junior Anthony Fischetti blocked the shot. Sequoia scored two free throws off of Fischetti’s foul and finished the first half tied 19-19.

Scallan started off the second half with a free throw, putting Carlmont in the lead at 20-19. Costello followed Scallan’s point with a two-pointer, pulling Carlmont ahead 22-19.

Sequoia scored two free throws, followed by another free throw that put them in the lead at 23-22. Costello immediately sunk a three-pointer, grabbing the lead. Costello stole the ball from Sequoia and made a lay-up.

With two minutes left in the third quarter, Carlmont held the lead at 32-25. Sequoia made a lay-up off of a steal, followed by one free throw. With one minute left, Sequoia scored one basket and two free throws, ending the quarter 33-31 Carlmont.

Sequoia opened up the last quarter with a two-pointer, tying the game at 33-33. The Screamin’ Scots and cheerleaders continued to support the team, yelling out chants to encourage the players.

“I think the Screamin’ Scots play a big part, but we were outnumbered by Sequoia and in the end that’s what it came down to,” said senior Tristan Gasperian, Screamin’ Scots member.

Costello scored a two-pointer, putting the Scots in the lead at 35-33. Halfway through the fourth quarter, Sequoia tied the score at 37-37.

Carlmont pulled ahead by one point from Costello’s free throw. With three minutes left in the game, Sequoia scored a lay-up and took the lead.

Sequoia held on to their lead as they scored two three-pointers. Carlmont was unable to make another basket, and the game ended with a Carlmont loss, 45-38.

“The players had a lot of energy. Defensively, we played our hearts out. Sequoia just made two big threes at the end and we couldn’t get the ball to fall in,” said Smith.

This gave other players a chance to step up. With one freshman and two sophomores on the team, they were able to play more and receive a lot of experience.

Costello said, “I fought my hardest, and we all played to our potential. I played my heart out. It was a good season, good year, good game.”

As seniors, this was the last high school basketball game for Costello, Torres, Scallan, and Hamdun.

Rodriguez said. “It’s upsetting seeing the seniors go, but I was happy to share the court with them for their last game.”