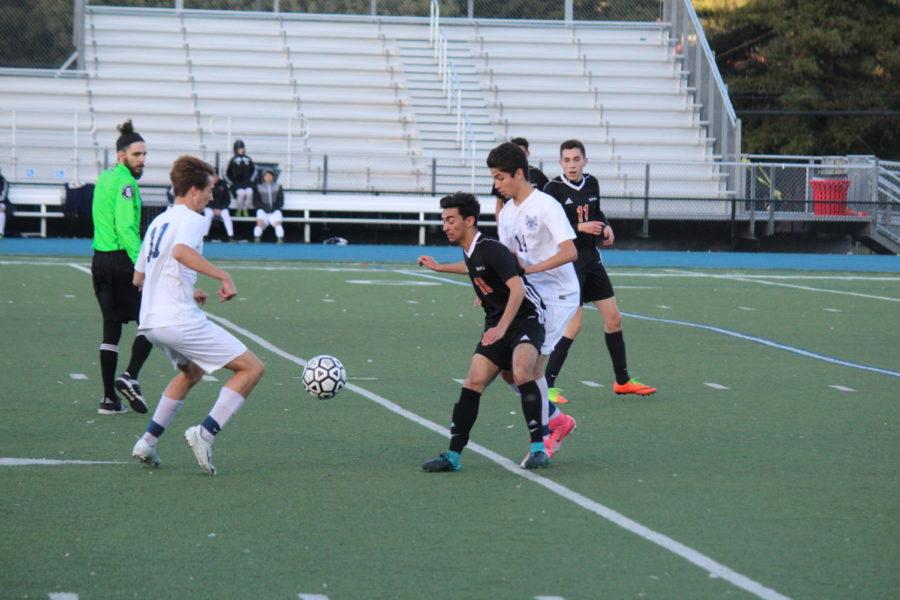 Defender Antonio Barba steals the ball away from Woodside forward.

The Scots and Wildcats played in an intense battle that led to a 1-1 draw.

On Feb. 14, Carlmont played Woodside in their final home league game for the Scots.

The two teams had previously met on Jan. 19 on Woodside’s home field. That game also ended in 1-1 draw.

This rematch did not disappoint as both sides tried to get their first win against each other this season.

The Scots came out aggressive as they were dominating the ball, not allowing any chances for Woodside to score.

“Our performance was solid tonight and we knew that Woodside was going to put some pressure on us and I think we handled that well in the first half,” said head coach Will Stambaugh.

In addition to their great offense, their spectacular defense was able to stop many run-outs by the Woodside forwards.

With all of the momentum on their side, the Scots were able to maintain their dominating pace throughout the first half.

Their efforts would later pay off in the 36th minute when striker Matthew Matias, a senior, struck the ball past Woodside’s goalkeeper off the far-post, giving the home team the 1-0 advantage.

“It was a great feeling scoring that goal because it was senior night and also it was nice to have the lead at the half,” said Matias.

After 40 minutes of hard-fought soccer, the Scots ended the first half being up 1-0.

Carlmont was not able to maintain the pace that they had in the second half as Woodside was finally able to penetrate the Carlmont defense, leading to many strikes on goal by the visiting team.

Woodside would finally get the break that they deserved in the 45th minute when a scramble for the ball lead to a missed clearance by goalkeeper Jason Korjeff, a junior, giving Woodside the possession which led to a strike on goal off the crossbar.

“We didn’t allow Woodside to get into the penalty area that much and we only gave up one goal which wasn’t bad but it sucks that we did let them score that goal,” said Nathan Godwin, a senior.

Woodside would continue to pressure the Carlmont defense as many shots were missed off the near-post and crossbar, almost leading to Woodside goals.

Woodside came closest to a winner in the 72nd minute when a Woodside forward got past a Carlmont defender, leading to a run-out and shot on goal that was miraculously saved off the hands of goalkeeper Jason Kojeff at full-stretch.

“I think the problem with goalkeepers is that you can be so afraid to come out and save a ball sometimes, but since it was senior night I decided to give it my all and try to get a win for my team,” said Korjeff.

After 80 minutes of amazing soccer, the game would again end in a 1-1 draw.