Varsity boys’ volleyball claims a victory against the Vikings 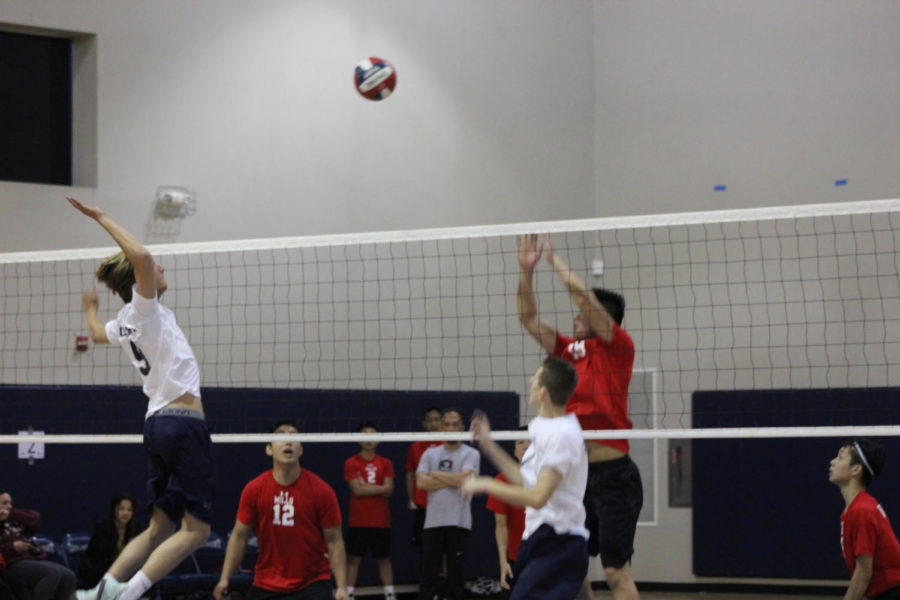 Bouchard hits the ball over the net and earns a point for the Scots.

The Scots’ gym was already as clean as could be, but the boys’ varsity volleyball team felt an urge to sweep the floor.

Instead of grabbing a broom, they swept the floor with Mills High School in a 3-0 set sweep.

That day, March 21, the Scots won on their home court against the Vikings.

Although the Vikings worked hard, the Scots’ plays were unbeatable and the Vikings had little chance of a win as soon as they stepped on the court.

As the first set began, the Scots automatically took the reigns of the game. The boys kept distance between the score, as senior, Nic Bouchard has endless strong hits, which earned numerous points for his team. Senior Jonah Przybyszewski also led the team, setting many successful spikes. The Scots won the first set 25-9.

“We played really well throughout all three sets. As a team, we improve every time we play together and will keep working on our plays but so far I am happy with the progress we have made because it is how we won tonight,” said Kazim Haider, a senior.

During the second set, the Vikings picked up their game, but the Scots still did not allow that to affect them. The score was neck and neck throughout the set. New players were put on the court and that helped the team reach success as well. The Scots won 25-21, as senior Jimmy Rudger scored the final point with a forceful hit that the Vikings could not get to in time.

“We played really well throughout the entire game. We had a few errors which happen but I think we all played well together as a team which resulted in fewer errors and tonights win,” said Bouchard. “This team can only get stronger from here.”

As the third set came, the boys were not going to allow any loss on their court. The team pulled it together and beat the Vikings 25-23 in the set. Przybyszewski kept the boys focused and motivated on the court with his leadership, helping them earn their win and setting the final point of the game.

Coach Michael Lapuz said, “I think we played well in the first set and carried it out throughout the game. During the second and third set, I changed the lineup and there were players playing different positions as well so I am impressed with how they adjusted. For the most part, the boys held their composure and won tonight together.”