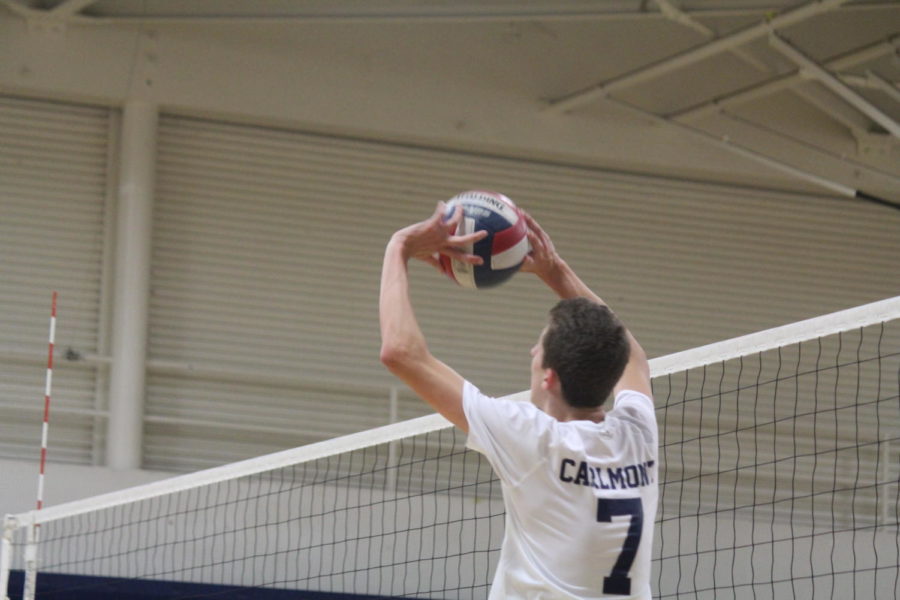 Jonah Przybyszewski, a senior, sets his outside hitter in hopes to get a kill.

After the first set ending 25-12 Carlmont, it seemed like Hillsdale had no chance against the Scots. But in a close third set, the Knights won by four points, giving them another chance to make a comeback. However, Carlmont was determined to win and did so in the last set.

The first set started off with Jonah Przybyszewski, a senior, getting six points in a row off of his serves. Even so, Hillsdale slowly caught up to the Scots from hitting and communication errors, making the score 13-11.

Despite the minor mistakes, Carlmont’s blockers and hitters were doing well, leading them to widen the point gap. On game point, Ethan Mayoss, a sophomore, got a kill which ended the set 25-12 Scots.

“Throughout the season, they have become more aggressive and they don’t let mistakes get to them,” coach Mike Lapuz said.

As the second set started, it became evident that the Knights were more motivated to win, as both teams were scoring back and forth. The Scots have the power and skill to get a good spike, but simple slip-ups only gave them a three-point lead.

After a brief timeout called by Hillsdale, Carlmont was still able to get kills but made a few serving and passing errors as well.

On the Scots’ game point, one of the Knights tipped the ball short, saving themselves from losing for the moment. But after Hillsdale scored a few more points, Carlmont gained their last point and the game ended 25-12.

As the teams switched sides, the Knights were disappointed at the close game, while the Scots were left with room for improvement.

“It’s easy to mess up the fundamentals, I still need to work on my serving and passing,” said Ezekiel Licudine, a junior.

When the third set started, the Scots shanked three of their passes, giving Hillsdale the upper hand. As the set progressed, Carlmont couldn’t keep up with the Knights, which made the score 13-9 Hillsdale and forced Lapuz to call a timeout.

Several points later, the Knights got a kill, discouraging the Scots as the score was 20-14 Hillsdale. In an attempt to keep up, Max Jung, a junior, also gets a kill, getting the team excited.

Although Carlmont did start catching up to the Knights, it wasn’t enough and the set ended 25-21 Hillsdale.

In the fourth set, the Scots went with their starting rotation in hopes of doing as well as the first set. That decision paid off as Jung got another hit in the campfire, getting the team rallied up.

Carlmont has a newly found fighting spirit, as the score was 13-7 Scots. They were being aggressive and were hitting the ball as hard as they could.

This led to Hillsdale getting frustrated when they kept on making simple errors like net violations.

Even though it wasn’t as fast as the first set, the game ended quickly with a final score of 25-17 Carlmont.

“The team still needs to work on not playing down to another team’s level, but I think today we had good chemistry,” said Giovanni Smith, a junior.

Their record is now 8-3, and their next game is on April 25 against Mills High School.