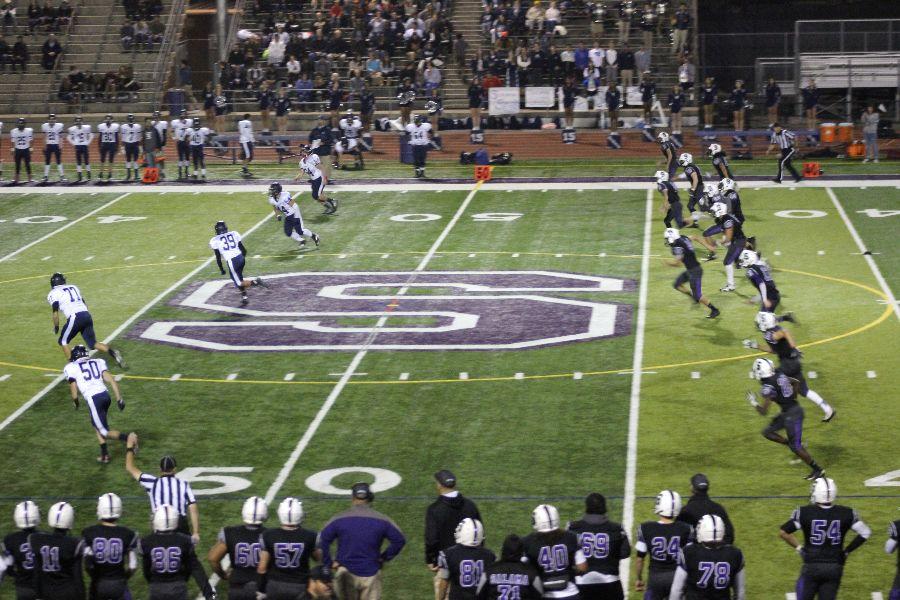 Sequoia Cherokees keep the Carlmont Scots on their toes in the match up for the Terremere trophy.

Varsity football competed for the annual Terremere trophy at Sequoia on Friday, Nov. 14. The Scots finished their season against their rivals, the Sequoia Cherokees.

“It has always been a big game going against Sequoia and trying to win the trophy,” said senior Dakota Regan.

The Scots came out flat in the first half with everything going Sequoia’s way, ending with a halftime score of 20-0.

“We couldn’t get into our rhythm early on in the game, and we knew we had to change that for the second half,” said junior Blake O’Connor.

Varsity football still had another half of football left, and for some it would be their last half in their high school careers. “I knew this was my last game so i wanted to give it my all and make the most of it,” said senior Berto Ruiz.

Carlmont responded in the second half with three touchdowns: one from Berto Ruiz, one from Theo Chatman, and one from Jake Kumamoto.

The game ended with a score of 48-19 Cherokees. “We gave it our all in the second half and we got some touchdowns but it wasn’t enough,” said senior Elie Abinader.

The Scots finish their season with a 4-6 record improving from their last year’s record of 3-7. “We made some improvement this season so hopefully that continues on to next season,” said O’Connor.

One of Carlmont’s main problems of the season was due to injuries. “We need to work to get healthy so our players don’t have to miss games so we can come out strong next season,” said junior Nico Ferrario.

The last game brings an end to a long fought season and, for the seniors, an end to a four year journey.

“I’ve been playing with these guys for so long it’s hard to see this come to an end. I look at some of these guys as my brothers,” said Abinader.

The Scots look to hang up their jerseys for the season, and get prepared for next season.