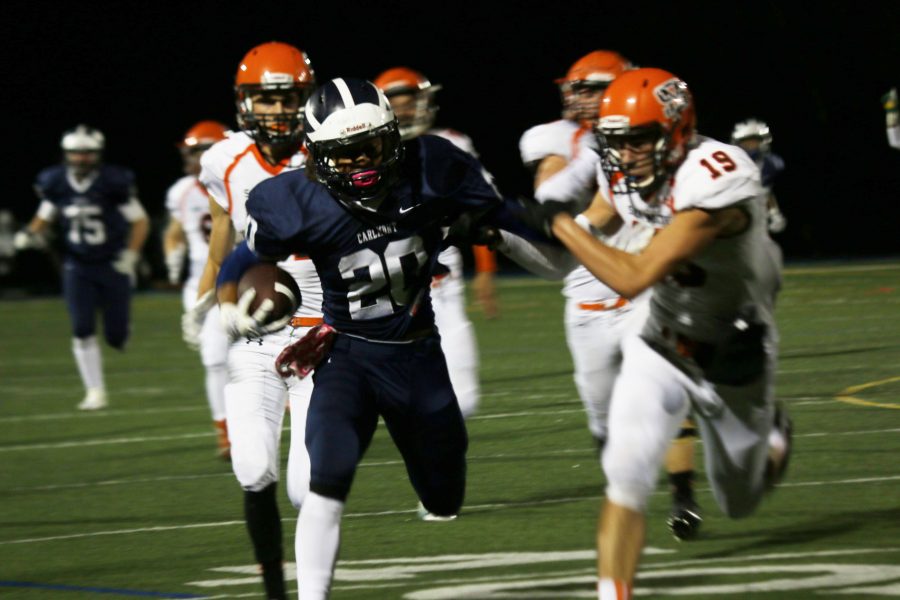 Tailback Devon Sagon deflects his San Mateo opponent as he carries the ball down the field for a first down.

The Scots remained forcible throughout the night despite falling to the San Mateo Bearcats 38-23 during their homecoming game on Oct. 14.

Carlmont set an early precedent with two consecutive first downs and a field goal, gaining the initial lead 3-0 six minutes into the game.

With 3:05 remaining in the first quarter, senior Bryan Tara tackled the San Mateo opponent at the one-yard line. But San Mateo was able to run the extra yard during their next play, taking the lead 7-3 with the addition of a convert.

Tailback Devon Sagon ran the ball for a first down with 6:32 left in the second quarter, but nothing came of it, as the first half ended 14-3.

“The Scots never gave up during the game, and they created an environment where everyone could feel involved and included,” said senior Julia Kelly.

During the third quarter, San Mateo extended their lead substantially, scoring three consecutive touchdowns and converts, bringing their lead to 35-3.

“They were physically bigger and stronger than us but we matched up well against them. We made a lot of plays and were able to block them. Our team was able to move the ball well against the [opposing] defense, but the little mistakes cost us,” said senior fullback Charlie Haake.

With just two minutes left in the third quarter, junior Timmy Palthe ran the ball and earned a first down for Carlmont with 16 yards to go.

Sagon continued this rally, scoring a touchdown for Carlmont. The Scots attempted a two-point conversion but were blocked by San Mateo’s defense, bringing the score to 35-9.

“As a whole, the night went very well for homecoming; the crowd looked bigger than last year and it looked like everyone was having a great time. But focusing on our playing, we’ve got to move on from this game and continue to work hard to win the last three games of the season,” said Haake.

Despite being down by 26 points, Carlmont persevered during the fourth quarter.

At the start of the last quarter, Carlmont’s punt pushed San Mateo back to their respective end zone, making them touchback. San Mateo kicked a field goal, earning them three more points and bringing the score to 38-9.

With only six minutes remaining in the fourth quarter, Carlmont began picking up steam.

Haake initiated the Scots’ rebound as he curled his run and caught a 20-yard pass, running it down the line for a first down.

The Scots found success through their running backs as Sagon continued the drive by running the ball for another first down. Palthe ran the ball for a touchdown gaining another six points for the Scots.

With just 1:59 remaining, senior Brenan Lasala scored a touchdown for the Scots, bringing the score to 38-21. This time, their two-point conversion succeeded, raising their score to 38-23.

“Overall I think the team put forth their best effort, and I am proud of how they played. It was really exciting to see them not give up and score two touchdowns near the end of the game,” said Kelly.

Carlmont’s substantial comeback, however, was not enough to take the lead back from their opponent, leaving the final score 38-23.

Junior Tyrese Lopez said: “I think that the team worked very hard and really played to win. The night as a whole was a very fun night and the atmosphere it created was spirited and inviting and I think that everyone had a great time. I loved how everyone was so involved and into the game, and it created a shared experience for everyone that we were all able to enjoy together.”