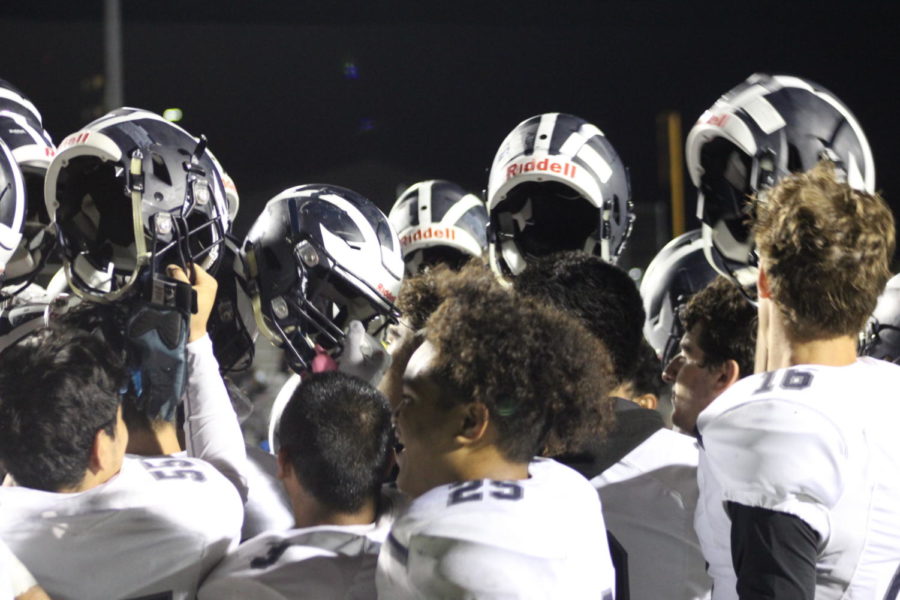 The Scots celebrate their victory that puts them one step closer to the playoffs.

The Scots inch closer to the playoffs and league division championships with their decisive win over Jefferson, 42-22.

This solidifies their first place position in the league, with a record of three wins and zero losses. Jefferson drops in the league standings with an overall record of 4-3. While the Scots continue to advance, Jefferson will need nothing short but a miracle to get back to the CCS playoffs for the second year.

Scots’ running backs Jason Morin, a senior, and Jonaven Kuhn, a junior, both had field days rushing for 256 yards on 20 attempts and three touchdowns and 144 yards rushing and one touchdown respectively.

The Scots advanced well into Jefferson territory on their first drive of the game but faced a fourth down and goal. After initially lining up in field goal formation, the Scots took a timeout to discuss what play to run.

After the timeout, the Scots scored off of a seven-yard run from Simon Tara, a senior, giving the Scots the lead.

“I feel that that was the turning point of the game right there. We just kept on scoring after Simon’s touchdown and did what we needed to do to win the game from there,” outside linebacker Atela Tengei, a sophomore, said.

After a successful point after attempt, the Scots were in the lead 7-0 with seven minutes left to play in the first quarter.

Jefferson tried to answer back with a score of their own, but a 40-yard field goal came short, giving the Scots the ball back at their own side of the field. The Scots Jason Morin ran through the Jefferson defense for a 68-yard touchdown run to make it 14-0 at the end of the first quarter.

On the other side, the Carlmont defense seemed to know how to shut down the Jefferson offense, only giving up a couple of scores in the entire game.

“Number 50 was their biggest guy for [Jefferson] so we tried to get away from him as much as possible. We doubled him up a lot of the times to make him less effective as well as switch up the line a little bit,” Tara said.

Jefferson kept their chances alive in the second quarter with an 87-yard drive that resulted in a touchdown to put the game closer at 14-7. The Scots did no favors for themselves as they enacted two penalties: a ten-yard holding call, as well as a 15-yard personal foul. Both only helped Jefferson’s case.

Carlmont responded with their own touchdown score in a 63-yard drive on eight plays. Carlmont quarterback Siupeli Netane threw a clutch 12-yard pass on fourth and 10 at the Jefferson 34 yard line to keep the drive alive. Morin proceeded to finish off the drive with a 5-yard rushing touchdown that put the Scots ahead 21-7.

Jefferson almost retaliated with another touchdown, but an errant snap that caused a fumble for the quarterback on fourth and goal at the Carlmont one-yard line ceased any chances of closing the second half only down by one score.

In the second half of the game, the Scots defense started to heat up starting with an interception thrown by Jefferson’s quarterback, Joaquin Alvarez, to Carlmont’s Mohammad Othman. The Scots would later force a fumble as well as another pick in the game.

In a highly physical game, emotions get the best out of some players. In the third quarter, a flag was thrown onto the field after a sack by Tengei. Jefferson center Adriel Montoya was flagged for an unsportsmanlike conduct penalty and was subsequently ejected out of the game.

According to middle linebacker Jackson Cook, a junior, Montoya threw a punch at Carlmont outside linebacker Miles Taye.

“Number 53 [Montoya] got heated with Miles after Miles pushed off of him at the end of the play. 53 then swung at Miles and got ejected,” said Cook. “We were hoping that a fight wouldn’t break out, but we were prepared for it to happen.”

After both sides exchanged punts, the Scots upped their lead to 28-7 on one of the most bizarre plays in football. Kuhn looked close to scoring on a 30-yard touchdown run, but the ball was stripped from him at the 4-yard line in which Carlmont junior Wesley Brown picked it up and ran for the score.

The Grizzlies reached paydirt from Alvarez’s 11-yard pass to Henry Tom, placing the score at 28-14 at the start of the fourth quarter. However, the Scots made sure to chew the clock while also scoring two touchdowns of their own- a 6-yard scoring run by Morin, and a 63 yarder by Kuhn. A late score by Jefferson in the waning moments in the game finalized the score at 42-22 with a Carlmont win.

When asked who the player of the game was, Carlmont head coach Jake Messina said, “There’s Julian, you could argue for Jonaven, I really don’t know. There was a lot of people who did great tonight.”

This game was not just an average game one would play in for many Carlmont football players. It was a revenge game for some, to take back a win that Jefferson took from them last year.

“This meant a lot more than just a game,” said Morin. “Unfortunately last year we couldn’t make the playoffs. To beat a team that beat us last year and to do it with so many great guys means a lot.”