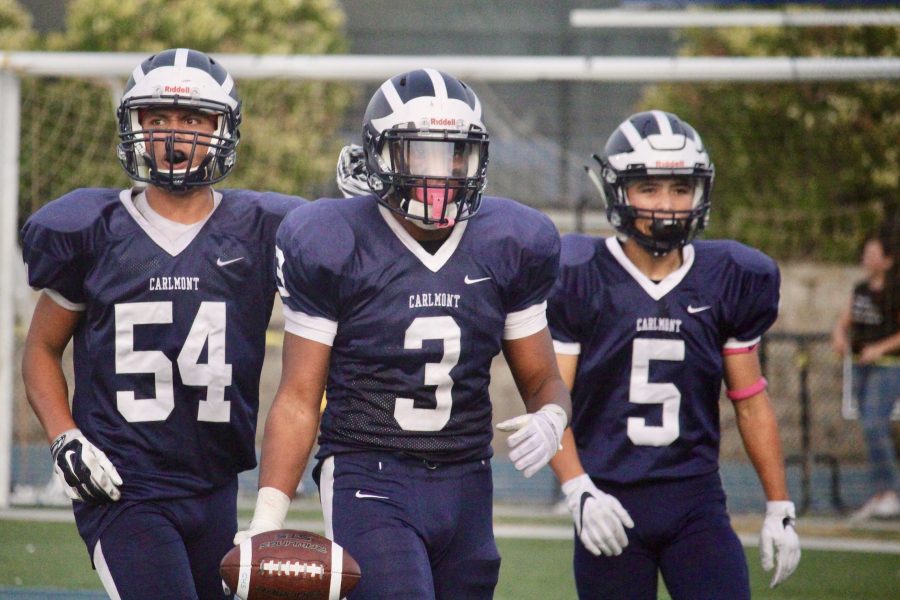 Blanks and his teammates returns to their half after Blanks scored his third touchdown of the night.

Varsity football’s season came to an end on Nov. 4 against Sequoia in a 30-23 loss.

“Watching the team this season was super fun. They definitely improved from the beginning of the season and throughout it they put forth their best effort and never gave up,” said junior Jessica Cramer.

The team ended their season with three wins and seven losses. However, within these games, four of them were against teams out of Carlmont’s league.

To start this new season off, varsity received a new coach.

“When I heard that this new coach we got started having weight room workouts in the spring (of 2016), I thought to myself wow this guy is pretty dedicated compared to our last coach. It got me excited that he cared a lot, and not just about our star players, but about everyone on the team,” said junior Henry Reich.

This year, varsity pulled up six sophomores as they were running low on players. Their team’s size was small compared to the other teams in their league.

The team as well had to adapt to learning a new style of offense which took some time to adjust to.

“During the summer, we practiced hard and I became really excited for the season because I knew that it was going to be better than the last one,” said Reich.

Varsity practiced and conditioned every single day over the summer in order to prepare themselves for their upcoming season.

“We felt that we were improving all season long and learning from our mistakes and losses as the season progressed. As a team we can’t let anything set as back and we have to learn how to fix our mistakes and not make them again,” said junior Josef Gonzalez.

For the next season, the team hopes to improve their skills and hopefully advance their rankings.

“Next season I personally want to be a more impact player on the team since I will be a senior. As well, I want to contribute as much as I can for the team in order to win. I believe that if we continue progressing at the rate we are, we will win league and make the CCS playoffs, which is our main goal,” said Gonzalez.