Varsity football surges to a strong win over El Camino 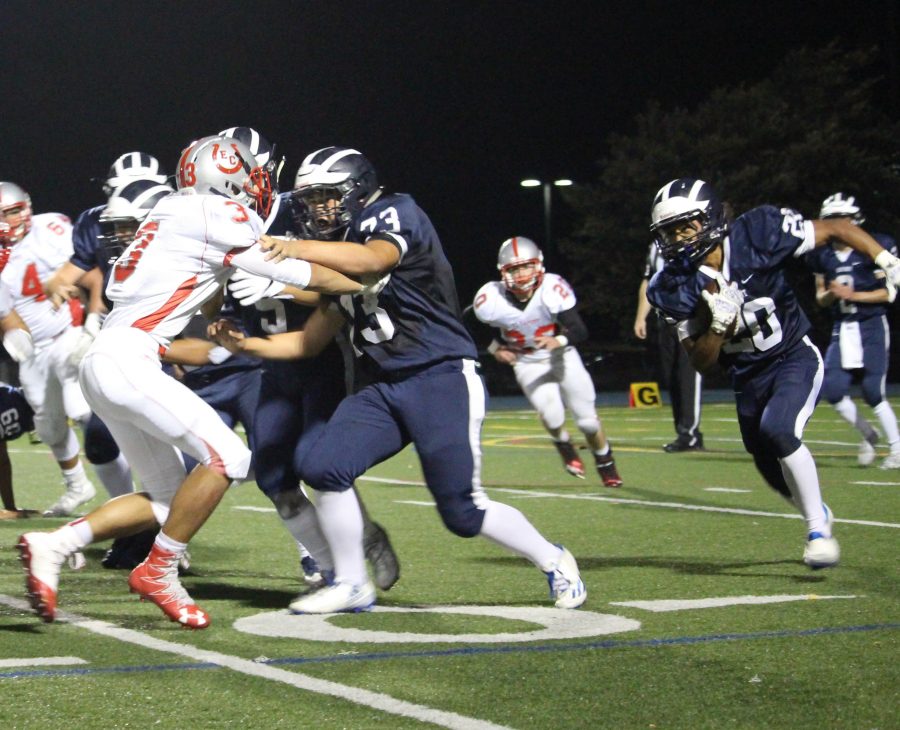 Carlmont's defensive line opens a lane for running back, Devon Sagon to move down field.

Yet again, Carlmont Scots fell behind early. But unlike their typical pattern, on Sept. 30 they shocked the crowd, or lack thereof, by coming back and beating El Camino High School 28-6.

As the Scots looked to the stands after scoring their first touchdown, the usually unavoidable student section, the Screaming Scots, was nowhere to be found.

“I think we just need our student section to be here more often and get the game riled up. A lot of students are studying for the SAT tomorrow and there’s just a lot of other stuff happening tonight,” said senior Ryan Callan, who attends every Scots’ home game to encourage school spirit.

“Also, the lack of student spirit might be due to the controversy surrounding the football team telling the Screaming Scots not to come to their games anymore,” said Callan.

Despite the absence of the typical blue-faced fans, the Scots were able to recover quickly in the first quarter and maintain their lead throughout the game.

Perhaps the Scots got all the encouragement they needed from a different form of school spirit. On Sept. 30, Concert Band attended their first Carlmont home game of the year.

“The football team actually did better than I expected,” said freshman Tim Kraemer. “I think it’s because of our playing. We get to play as loud as we can and get into the school spirit.”

With just three minutes left in the first quarter, the Scots were able to break away from the mass of El Camino opponents and score both a touchdown and the extra point, putting them ahead 7-6.

“I feel like we played well. Our defense really held the team down and our running backs carried us,” said senior Jason Jung.

The Carlmont Scots were able to shut down the opponent’s attacks early on, keeping them at a mere six points for the rest of the game.

Jung said,“For the rest of the season, I think if we continue to execute, we can win the rest of our league games and we will be in a good position.”