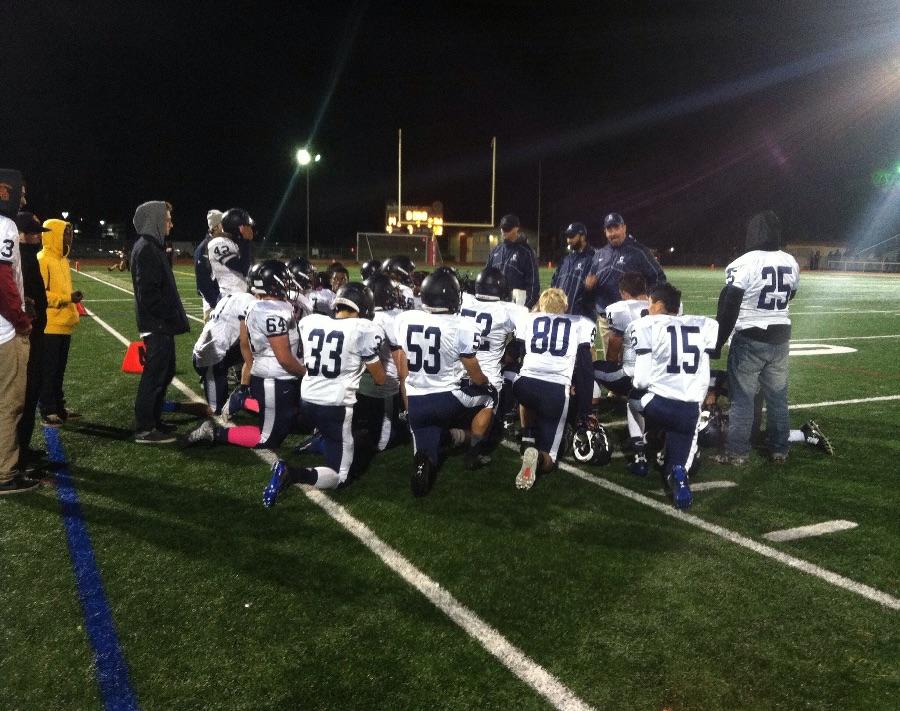 Coach Richard Gianuario gives a victory speech after the game

“As soon as the game started, we came out strong and we had the upper hand. We dominated,” said junior and running back Sami Makaafi.

The Scots were up 14-7 at halftime, and wanted to focus on a more attacking approach.

“We did good in the first half, but we made some changes to have a more offensive game plan so we [could] get some touchdowns and extend our lead in the second half,” said junior and tailback Jake Kumamoto.

Carlmont was short on players due to coach Richard Gianuario’s decision to bench anyone who missed school on Friday, Oct. 31 because of the San Francisco Giants World Series parade in San Francisco.

“Even though we were missing some players, we still had a football game to win, so we had to compromise,” said Makaafi.

With several players inactive including their quarterback, the Scots relied on their running game. They had three touchdowns from senior Willy Te’o, one from junior Shanil Patel, and one from senior Dominic Blanks.

“Our running game was working so we stuck to it and kept running the ball and we came out with the win,” said senior and wide receiver Berto Ruiz.

Carlmont had a decisive lead in the second half  giving them some breathing room.

“Since we had a big lead, coach let me run the ball which was pretty exciting because I don’t have many chances to run the ball,” said senior and left tackle Elie Abinader.

The victory puts the Scots one game out of winning their league overall, and advancing to the playoffs.

“Next week at practice, we [have to] stay focused, keep working hard, and doing work so we can go into the post season,” said Kumamoto .

The Scots will face Kings Academy at home on Friday, Nov. 7 at 7 p.m.