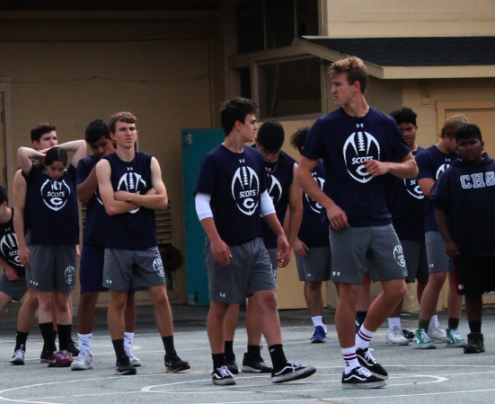 Carlmont Football team warms up for an early workout and practice.

The steady clang of metal on metal echoes across the room as sweat drips onto the ground, accompanied by the sound of heavy breathing. Although the sun has just risen, the intensity and focus throughout the room is impenetrable.

This is a normal morning for Carlmont’s varsity football team.

Two seasons ago, Carlmont’s JV football team went 0-10 during the season, leading to disappointment and a desire to improve.

“Watching the football games, JV just couldn’t move the ball down the field quick enough. They were missing a lot of tackles and weren’t playing like a true team,” said Riley Schultz, a sophomore.

But this year, those same players are now on varsity, celebrating a tremendous 2018 season. Not only did they win PAL championships, but they made it to the CCS Division IV Championship. The last time the team made it to CCS playoffs was in 1991.

“Last season I really saw change, both mentally and physically. The coordination was better and the defense had a lot more power when it came to hitting. The general execution on the field looked a lot better,” Schultz said.

Due to the Scots’ success, the California Interscholastic Federation (CIF) moved Carlmont up to Division II.

“This is no joke. A lot of the teams that we’re going to play next season have good reputations, but everyone here’s been working hard and it’s gonna show on the field,” said Jacob Azzopardi, last year’s starting linebacker and captain.

Although the season has ended, players continue to endure long workouts in order to improve.

“Our team has worked tremendously hard this offseason to get where we are today. We’ve had the same group of guys grinding day in and day out, whether it’s in the weight room or on the field,” said Sean McKenna, a sophomore. “We started training almost right after the season ended.”

“We’ve had them coming in and ready to go at 6 a.m. for the past couple months. No talking, no messing around, we just get right to work,” Rado said. “Stretch out, get the blood pumping, then it’s lifting for the next hour or so. I have them do cleans, overhead squats, back squats, split jerks, and kettlebell swings, really just to build up that power that’ll translate to more force on the field.”

Now that summer is closing in, the team has been doing 4:30 p.m. to 8:30 p.m. practices consisting of workouts and field training. Sophomore Kye Vela called Rado a “madman” for the vigorous training and perfection that is expected of the team.

Though the workout itself contributes to the team’s success, commitment and dedication to the team is also largely emphasized.

“When we’ve been working, other teams have been doing nothing. It’s all about commitment to the team and commitment to a goal and right now we have that,” McKenna said.

As the offseason preparation continues, players hope to see their hard work pay off next season.

“Real talk, I don’t know if we can win state again, but I know we can have a winning record this coming season. All the parts are there,” Vela said.

The Scots’ determination to win shows in their confidence and dedication to their team.

“As long as our team continues to learn from each other and from our coaches, there’s no team that can stop us. To test out what we’re made of against higher-ranking teams is all we’ve ever wanted. We’ll be ready,” McKenna said.