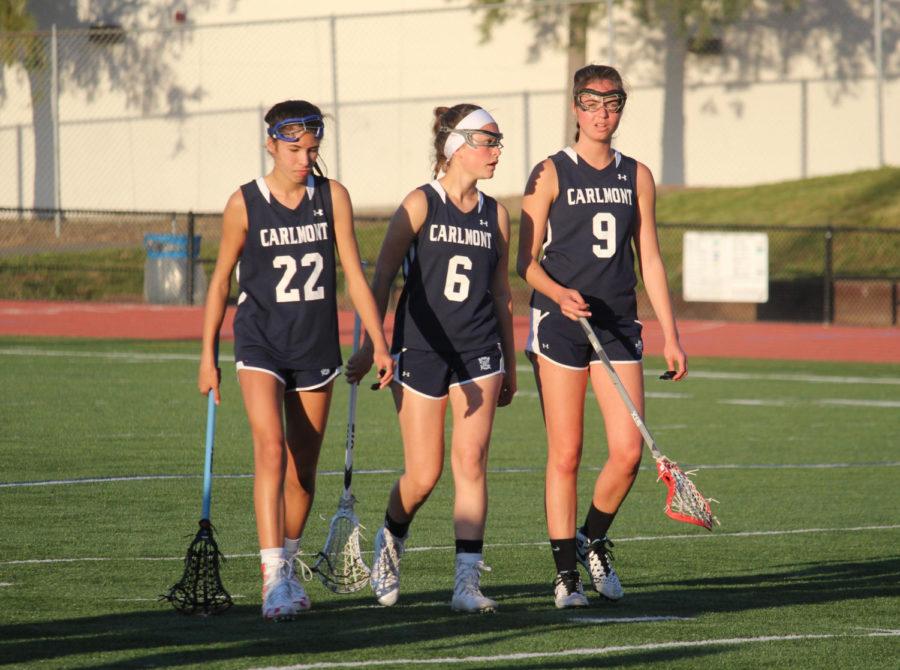 In the match between two offensive powerhouses, it was the defense and intensity of the players that determined the winner of the West Bay Athletic League (WBAL) playoffs on May 8.

Going into the game, players and coaches from both Carlmont and Woodside were unsure who would win the match, as both teams are known for their strong offense and high scoring games. However, by the end of the night, it was Woodside who qualified for semifinals winning 21-10.

Though currently the third highest scoring team of WBAL, Coach Stacey Myers of Woodside was unsure if her team would win Tuesday’s match.

“I’m a little nervous,” Myers said. “I’m confident in my team’s abilities, but in our league, any game could go either way.”

Rather than the Scots taking possession back after the draw, it was Raynor who was quick to catch the ball and score her second goal of the match.

That exact play repeated in almost the same manner as Carlmont’s defense struggled to catch up with the quick-footed attacker.

Frustrated by the lack of intensity in the game, Assistant Coach Wendy Lee of Carlmont called a timeout.

As the Scots huddled up, their defense vocalized some of the issues they’ve had so far.

“We need to mark [Raynor]. She’s getting through our defense because we aren’t being aggressive and are leaving a lot of players wide open on defense,” senior Izzy Lunderman said.

Carlmont returned to the field after advising defense to mark up opposing players and pick up on Woodside’s attackers.

Determined not to fall behind any longer, Carlmont gained possession in the next draw and eventually, freshman Sophie Brack scored Carlmont’s second goal.

Twelve minutes into the first half, the game started to turn around as the defense became more aggressive. It seemed as though the players took the advice of their coaches and teammates to heart as they began to mark up and fight for possession.

Looking back on the game, Carlmont junior Olive Peschel noticed that they started off strong and fueled with excitement knowing the game would either be their ticket to semifinals or their last game of the season. However, that energy died down after Woodside scored several goals on them.

“I think when it comes to our team, as soon as the other team gains a lead we tend to slow down and lose a lot of our confidence,” Peschel said.

Senior defender Gianna Westmoreland also noticed the loss of intensity and added that in the heat of the moment, some players put their frustration out on others.

“We need to work on our team connection because right now, people are playing as one player rather than as a team,” Westmoreland said. “We need to work together more because that’s how we get more opportunities to score goals.”

However, even after the Scots began to bring up their competitive spirit and players such as Caroline Conway, Nicole del Cardayre, and Alexa Jamison scored several goals, the Wildcats were too far ahead.

While many Carlmont players believed their performance was not the best compared to previous games, Woodside believed that this match was their best yet.

“This is probably one of our best games so far,” said Coach Myers of Woodside. “My team just came out really hard, we had good intensity, and we got a lot of the draws which was awesome. Our defense was nice and clean and we were making some smart decisions on offense. It’s always fun to play against Carlmont because they always challenge our players to do their best.”