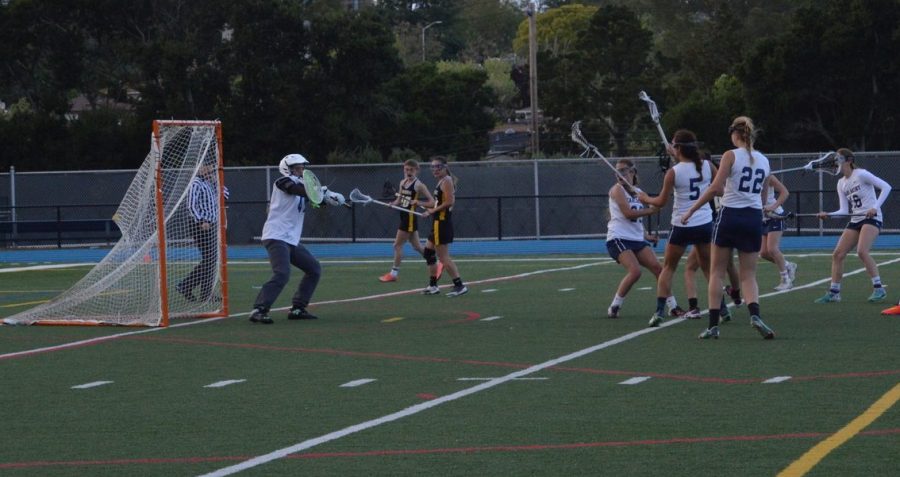 The Tigers shoot successfully on the Carlmont goal and score.

Varsity girls lacrosse lost to Lick-Wilmerding High School on April 22. A combination of minor technical errors and unlucky shots resulted in the 12-5 loss.

The first face-off was won by the Tigers. Both teams dashed for the ball in hopes of scoring first.

Lick-Wilmerding was able to maneuver through Carlmont’s defense with their speeding and passing abilities. They scored the first goal at three minutes in. Less than a minute later, however, the Scots retaliated with a goal from junior Alyssa Fine.

Both teams were determined to win every chase towards the ball. The Tigers surprised some Carlmont players with their aggression.

“We had a lot more sportsmanship on the field, and in that sense I think we won. They played a rougher game than we did,” said junior Lillian Gowen.

The Tigers went on to score two more goals by the end of the first 20 minutes. Carlmont began to make more efforts to get to the hole and shoot.

At 24 minutes in, senior Claire Wheeler scored after a series of passes. Senior Megan Handley scored immediately afterward. At halftime, the score was tied at 3-3.

Lick-Wilmerding proved their determination to win throughout the second half. They picked up speed, carrying the ball far down the field. The Scots shut down multiple scoring opportunities in their defense and goal, but at times it was not enough to stop the attacks. The Tigers scored three more goals by 13 minutes into the second half.

As players from both teams began to tire out, Fine was able to successfully sprint past the Tigers and score. The score was now 6-4.

Lick-Wilmerding reacted to this goal by sprinting to every ball and completing several successive passes. Their shots were accurate and strong, and they went on to score five more goals within the next eight minutes. Carlmont competed by setting up several scoring opportunities, but all shots were saved by the Tigers’ goalie.

Although the Scots were down 12-4, they did not give up. With four minutes left in the game, they picked up their speed and played with full effort, dominating the last few minutes of the game. This perseverance led to junior Caroline Concilla scoring the last goal 48 minutes in. Carlmont kept up their determination and skill until the very end of the game.

“Although we lost a bit of our momentum in the second half, I think we still played our hearts out until the end,” said Fine.