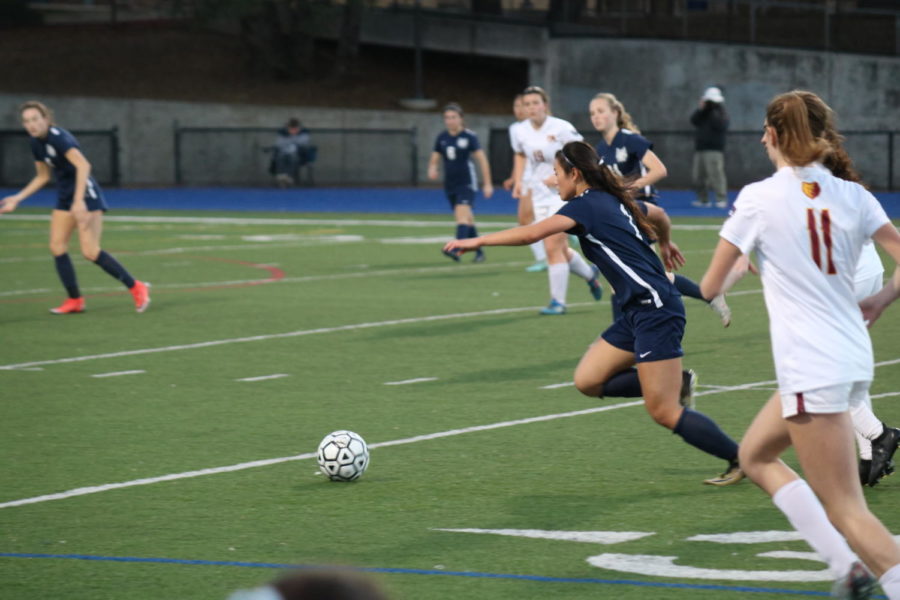 Ali Uozumi, a sophmore, charges towards the goal with the ball.

The Carlmont Scots were left with a crushing loss, 4-2, against the Menlo-Atherton Bears.

The varsity girls soccer team started with a slow offense against MA. They struggled to get open shots and to pass the ball.

“We had a lack of fundamentals that we need to work on as a team,” said Head Coach John Wilkins.

After 13 minutes of slow play, Yara Gomez scored a 30-yard shot for the Bears, putting some pressure on the Scots.

13 minutes after the score, Rachel Matatyaou of the Scots tied up the game, allowing the Scots to feel a little less stress. They decided to focus more on defense.

Soon after, a failed attempt at breaking the tie, Juliet Dineen of  MA headed the ball into the Scots’ goal off of a corner shot. Breaking the tie, the Scots were nervous. They wanted to score one more time before the half to gain a little confidence. Luckily, that pressure upped their aggression.

That high-risk style paid off, as Nare Avetian scoring with only 4:35 left in the half.

“We were feeling very pumped because even though they scored and took the lead we were able to get right back in it and score again instead of feeling down,” said Aleece Kessler. “The game plan was to continue playing as a team and using the whole width of the field.”

Within ten minutes of the second half, Kate Zanolli scored with another header for the Bears.

That score left the Scots down by one goal and feeling anxious to score and tie up the game.

Alas, there was no score for the Scots. With ten minutes left, the Scots reverted to the previous half’s aggression.

Elle Brough ended up getting a ball straight to the face and in the frenzy and was placed on the bench due to the injury.

This aggressive strategy also left an opening on defense. The Bears took this opening and scored with 2 minutes left in regulation. This goal was a dagger for the Scots, leaving them with a loss, 4-2.

“We have been unlucky throughout the season and this game is also included,” said Wilkins.

This crushing defeat for the Scots will motivate them to win the remaining four games of the season.