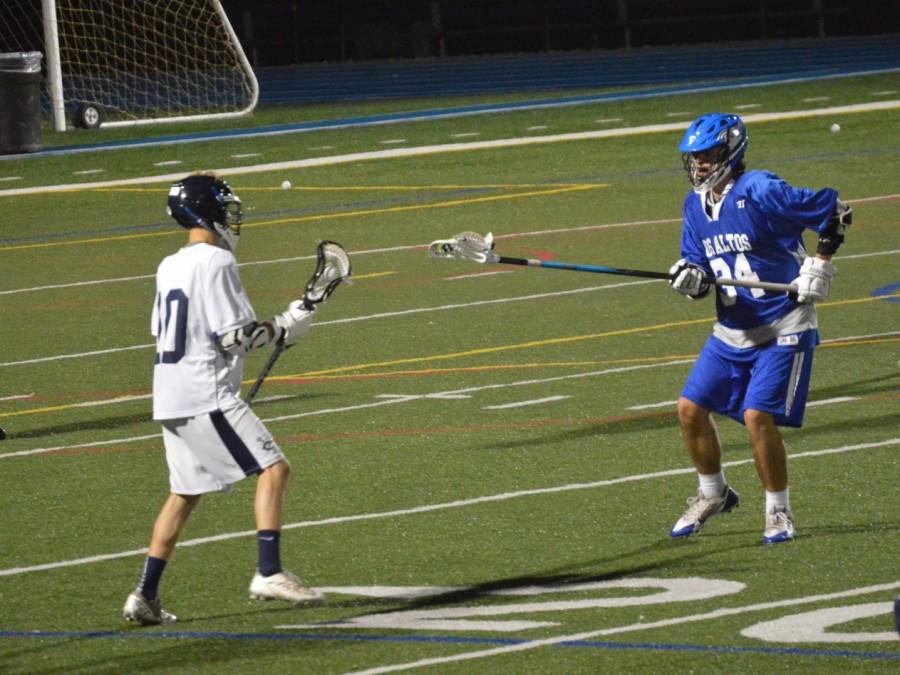 The Scots started out strong, scoring a goal within the first 13 seconds of the game. Junior Matt Reiley ran the ball up the field and passed it to senior Marshall Cofield, who successfully shot it into the Eagles’ goal.

The Scots continued to dominate play until Los Altos made a persistent offensive attempt, scoring a goal eight minutes in and tying the game. Less than a minute later, they scored again, pulling ahead at 2-1.

Both teams fought aggressively. There were several fouls in the first half, including a body check from Los Altos.

At nine minutes in, sophomore Simon Haugwitz blocked out the Los Altos defense, opening up space near the goal. Junior Luke Cadona fired and scored, tying the game again.

The Scots did not stop their effort there. At 11 minutes in, Cofield faked out the Los Altos defense, resulting in another goal for Carlmont.

The second quarter started with substantial amounts of effort put forth and fairly equal ball possession by both teams. Carlmont began to have multiple strings of passes within their offense, and their defense continued to shut down Los Altos’s opportunities for a goal.

Five minutes into the second quarter, the Scots ran the ball up the field and after several consecutive passes, sophomore Jason del Cardayre scored. However, the Eagles retaliated immediately with fast movement and passing and managed to score only 12 seconds after del Cardayre’s goal.

The first half ended with Carlmont dominating play, scoring three more goals. Los Altos also scored another goal, and the half ended with a score of 7-4, the Scots in the lead.

Los Altos began to play with a stronger determination to win. They made quick runs down the field, creating opportunities for goals. The Eagles scored three goals within the third and beginning of the fourth quarters, tying the game at 7-7.

The last six minutes of the game consisted of a multitude of quick passes and dashes down the field. The Scots and the Eagles were neck and neck, both teams fighting hard to the finish. Los Altos had quickly gained momentum after their three consecutive goals, and Carlmont had to fight to try to regain their lead.

Although Carlmont worked hard to defend the game that they had previously dominated, it was not enough to stop the tenacious attacks put forth by Los Altos.

The Eagles scored with four minutes left, winning the game with a score of 8-7.

“We were working hard, but I think in the end we caused too many turnovers and gave too many opportunities for the other team to score. They got us with more energy,” said del Cardayre.

Boys lacrosse experienced a tough loss, but still recognize the positive results of the game.

“In offense, we possessed the ball much better than we used to. We had good ball movement and good off-ball movement, and the defense played strong as always,” said senior Sean Piety.