Varsity lacrosse trampled by the Falcons 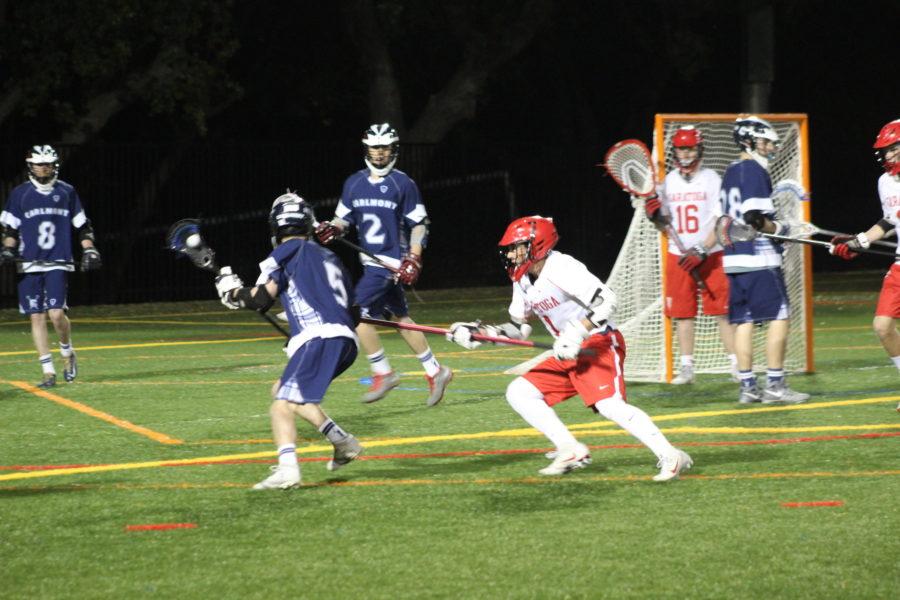 Harris Branch, a junior, goes in for the shot against the Saratoga Falcons.

The Saratoga Falcons beat Carlmont 15-7 on April 3, on a difficult night for the Scots.

The Falcons started off strong in the 1st quarter, gaining a 5-0 lead on the Scots.

The Scots were able to put 3 points on the board by the end of the 1st quarter, by seniors Nathan Dougherty and Ronny Ozorio. But that was the majority of the action the Scots saw for the game.

The Falcons started the 2nd quarter continuously scoring, eventually putting up a 10-3 lead going into halftime. The Scots had a strong 2nd quarter in defense, but couldn’t keep up with the current lead the Falcons had made.

The Falcons went into the 4th quarter still with a big lead of 14-5 and eventually held on to win the match at 15-7.

Coach Todd Irwin of the Scots noticed the morale of the team go down throughout the game.

Irwin said, “Tonight was a rough game, we came out flat and had several guys out for injuries, including two of our guys getting knocked up during today’s game.”

Irwin also said, “Our fundamentals were not where they were even last week, our game against Burlingame where we won, had us in high spirit, but I think the last few days we rested on that win during practice rather than practicing like we usually do.”

Morris said, “Practice has been slow, as we’ve been down two of starting guys, and we were just too relaxed from our previous win, but we’ll pick it up.

Morris said on the team’s performance, “It was tougher than most of our games, in the beginning, we had lost a lot of points, and our team already had lost our starting goalie, and faceoff member this year too. For another one of players to go down hurt our morale for the rest of the game as it went on.”

The Scots will take on Woodside Wildcats this Thursday in one of their final league games for the end of the lacrosse season at 7 p.m at Carlmont.