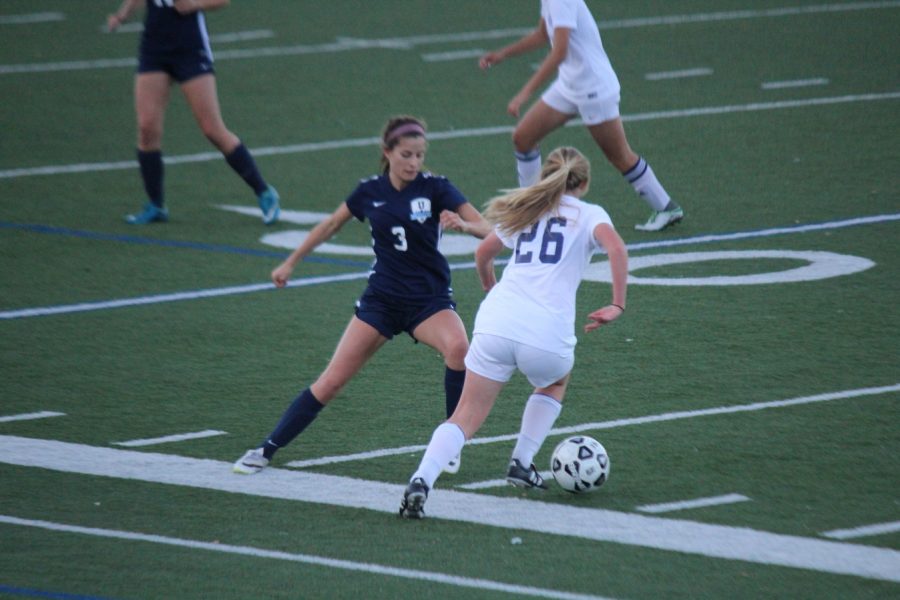 11th grader Lauren Morris dribbles the ball up the sideline.

As the soccer, season begins to roll in this winter the girl’s varsity took home a strong win on Nov. 29 under the bright lights of Carlmont’s home field against Urban High School.

“I think the whole team played well. We started off strong, but as the game went on during the first half we didn’t have a lot of aggression,” said junior and team captain Alexis Elipious, “But once the second half began and we scored our first goal we picked up our game.

The plays started off slow as both teams lacked aggression and motivation, yet the outlook of the game changed quickly after the Blues scored off of a corner kick that the Lady Scots could simply not save.

Once the second half began freshman striker, Kyla Orthbandt ran up the sides of the field pressuring the Blue’s defense.  Midfielder Eliopolus was able to follow up on Orthbandt’s shots and score a goal for the Scots.

Sophomore Kayla Gustafson said, “I see the potential in this team, we are getting stronger, and everyone is working well together. We did well on following up on the ball and pressuring the goalie when we got close to scoring.”

Senior Paris Bartolo played strong as the center mid and was able to work through the players and score a goal from outside of the goal box.

The final score of the game was 3-1 as the Scots laid a victory down on the field as they continue to work for more wins throughout the pre-season.

The new team captains, Elipious, senior Annabelle Lee and junior Lauren Morris, are striving to lead the team on the field during games and practices for a successful outcome of the season.

“Our team played well but we have some things we need to work on. We are still getting to know each other but once we do I think communication and successful plays will increase as we unite as a team. I am excited to see what this team is going to bring this final season of my soccer career at Carlmont,” said Bartolo.