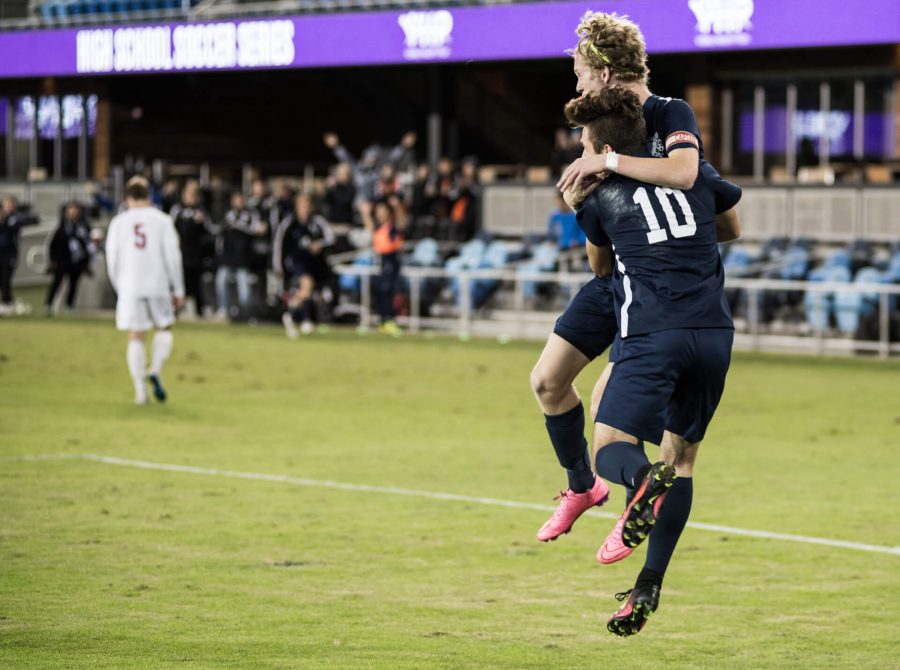 Fitzpatrick and Avetian celebrate shortly after their team takes a 1-0 lead.

Although they were playing in a professional stadium, in front of a crowd, and with a man down on defense, the Scots didn’t seem to mind at all. On Dec. 9, they beat Saint Ignatius 1-0 on a late game goal by senior captain Dro Avetian.

The game started off slow and full of mental mistakes by both teams.

The Scots came out of the gate with their defensive line pushed way up high to put the pressure on. SI started by sitting back and waiting for an opportunity to counterattack. This led to the possession being one-sided in the first half in favor of SI.

“The pressure, we dealt with it. It wasn’t a big deal. We know how to play soccer, we know the game, we came out here and did what we do best,” said senior center back Jack McLean.

Coming off a satisfying draw with state champions Bellarmine, the team had a lot of confidence even with the obvious size of the game.

The difference in the teams was how they handled themselves on the big stage.

Everyone could tell both teams were affected by the huge arena and big lights.

“You could tell the difference between the first and the second half,” said Stambaugh.

Enjoying their win, the players kept it team oriented and praised the whole effort from coach to player.

“I don’t think one person took this game to the win. I think everyone participated and did their job and that’s why we came out with the win,” said Avetian

The game was definitely a team win, but it was also highlighted by an exceptional individual play.

The game is coming down to the wire with Scots up one nothing, and SI has a seemingly easy tap in goal and out of nowhere AJ Lopacinski slides in and makes a goal line clearance to seal the win.

“Those moments are the difference between winning and losing and that one right there where AJ cleared it off the line, that was the difference,” said Stambaugh