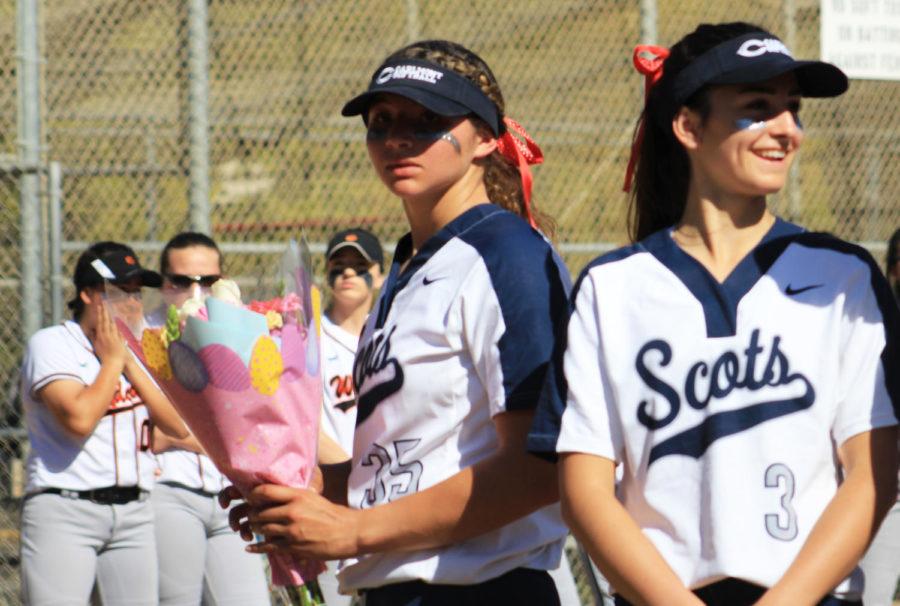 Less than a year ago, Jim Liggett, a beloved coach, teacher, and friend of many, passed away due to amyotrophic lateral sclerosis (ALS) or Lou Gehrig’s disease.

In a ceremony held before their game against Woodside High School on March 28, the varsity softball team that he dedicated 41 years to dedicated their season to him.

Tying their hair back with red ALS awareness colored ribbons, the team stood united as various coworkers and friends of their former coach spoke at the pregame ceremony.

Marco Giuliacci, the current coach of varsity softball, was one of the first to speak at the memorial.

“Jim was a good person all around and cared so much about his players,” Giuliacci said. “I’m so proud to be running this program now from a guy who built probably the best softball program that’s ever been built in the state.”

While his state record of 1,009 wins and 26 league championships will continue to live on in the record books, many of those who knew him say that the influence he had on them will remain with them for life.

Even those who play against Carlmont, such as Alexa Daines, the varsity coach for Woodside, knew Liggett.

“I met him in eighth grade after he invited me to come play with the team. I was in the process of choosing between Carlmont and another school but after talking to him and seeing how he coached, I felt an instant connection that really solidified my desire to play [for Carlmont],” Daines said. “It was something very special to be playing for the ‘Home of the Champions’ and honestly, it’s the truth. Some of the best softball in the state came from him and it’s all thanks to the culture of excellence and winning tradition he established.”

Following the ceremony, the game began, and with crowds still recalling memories of Liggett, the Scots dominated the field.

Senior pitcher and captain of Carlmont’s team, Mailey McLemore, dominated on the mound with strong pitching throughout the afternoon. She stayed confident and believed that being able to play in the game was a great honor for her and her teammates.

“I think we are playing a good game and having everyone out here for [Liggett] helps a lot,” McLemore said during the sixth inning.

The Scots dominated with both a strong defense and offense. Within each inning, Carlmont plated runs while Woodside struggled to complete plays. It wasn’t until the sixth inning that Woodside scored, and by that point, it was too late. The game ended 9-1 in the Scots’ favor.

Even without Liggett on the field, the girls continued their winning tradition and honored his legacy.