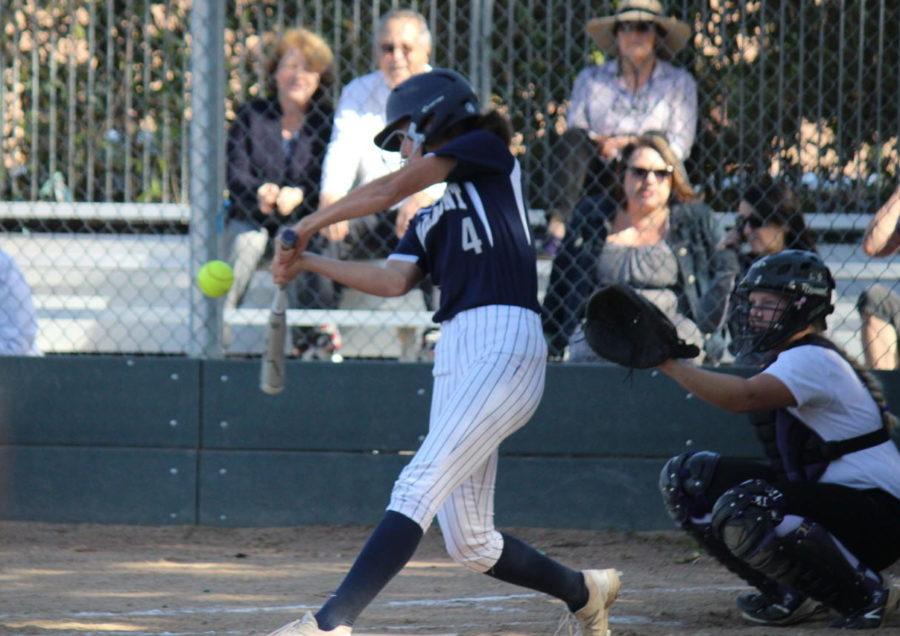 Sophomore Amanda Kondo tries to hit the ball thrown by a Sequoia pitcher.

Cheers and words of encouragement could be heard throughout the field as Carlmont’s batters went up to home base. “Go babe!” and “You got this kid!” were commonly heard remarks from players all around.

On April 3, the Scots beat Sequoia 10-0, maintaining their winning streak.

“The team gets along pretty well and it helps us play better,” sophomore Tayler Wise said.

The first inning wasn’t too eventful for the Ravens, as they didn’t get any plays or runs.

But when Carlmont was up to bat, Mailey McLemore, a senior, hit a fly ball deep right and got to third base. After the next batter got a strike, the catcher tried to give the ball to the third baseman but overthrew it, giving McLemore a chance to run to home base.

In the top of the third inning, Ashley Trierweiler, a junior, hit a triple as it went to left field. But when she tried to get a steal of home plate, she almost got tagged out by the third baseman.

During the fourth inning, Sequoia got a player on first, making their team yell and cheer louder.

“After a really long time, you learn to block out the other team’s yelling so it’s not distracting,” said Kinsey Cook, a junior.

However, even with the Ravens increased energy, they still couldn’t get a run off of the Scots’ pitcher, McLemore.

When the teams switched sides, Eimear Cunningham, a junior, hit the ball out of the park and got a home run. The team was so excited that they came out of the dugout and showered her with high-fives.

Not too long after, Katy Rodgers, a senior, hit a base hit to right center which gave another Carlmont player a chance to score. At this point, it was 3-0.

In the bottom of the sixth inning, McLemore got a home run while two other people were on base, scoring three more runs for the Scots. Carlmont scored two more points in that inning, widening the gap in the score.

In the last inning, Trierweiler got a steal while her teammate was up batting, and that same teammate got a walk. Right after, both of them get to the home base as another Carlmont player had a deep hit to center field.

Sequoia never got a chance to score, so the game ended 10-0 Scots.

“It’s really a psychological game, and you have to be on top of it 100 percent of the time,” Cook said.

Their next game is a home game against Saint Francis on April 5 at 4:00 p.m.