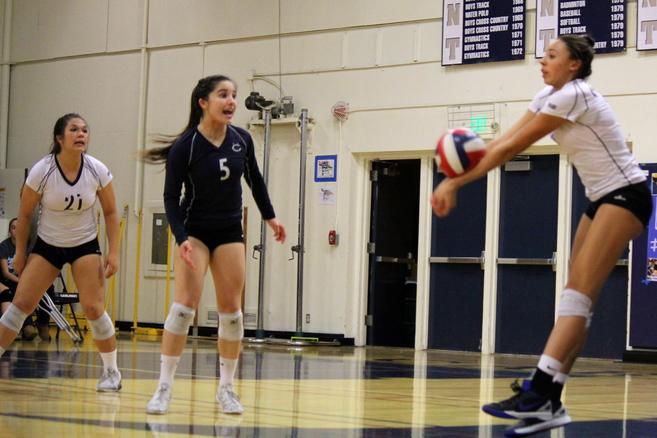 The crowd’s energy was high in Carlmont’s Terry M. Stogner Gym, and the two teams fed off of it.  After introductions by physical education teacher Patrick Smith, the teams encouraged each other and prepared themselves for a fight.

“Playing for varsity was a good experience; I was nervous because I definitely felt the pressure to perform well today,” said Chao.

During the first set, the Scots shot forward and took a six-point lead right off the bat.  Their clean passes in serve receive were mirrored by well-executed hits by senior middle hitter Alexis Morrow and sophomore outside hitter Maya McClellan.  The pair’s strategic placement into holes left behind by the Cougars’ defense cost Evergreen Valley six more points.  As the Scots continued to climb on the scoreboard, coach Chris Crader substituted in players who hadn’t had a chance to play as much during the season.

“There’s a lot of girls who work hard throughout the season, and if there’s a match I feel they’ll be successful in, they’ll have a chance to play,” said Crader.

The second set started with much more energy from the Cougars.  Coming off a loss, Evergreen Valley was able to pump themselves back up and fight to the end.  The two teams seemed evenly-matched throughout the set, rivaling in perseverance and intensity.  Carlmont junior Anya Meredith took the front row by storm as she hit into deep corners and placed tips into the Cougars’ defensive holes.  Despite Evergreen Valley’s fight to stay on Carlmont’s heels, seniors Elena Mateus and Erin Alonso refused to give up, diving and hustling in the back row to keep the ball from hitting the ground.

The second match ended 25-23 in favor of the Scots.

Much like the first set, the Carlmont took a quick lead in the third and final set.  A pass from junior Makenna Twisselman ricocheted off senior Mia Hogan’s head to Alonso, who passed the ball over the net.  Evergreen Valley seemed to tire out, struggling to keep the ball in play after an initial pass.  As Carlmont’s score continued to rise, Chao was substituted into the game.

“I was comfortable playing with the team today.  We really came together and communicated well out there,” said Chao.

Chao proved beneficial to the team with her deep kills and quick defensive reflexes.  Not long after, Vanoncini joined her junior varsity teammate on the court.

“The girls work really hard during the season, and it’s nice to be able to give them that reward of playing up and extending their season.  I’m really proud of how they played today,” said Crader.

A final tip over the net by Mateus secured the Scots a 25-7 win.

“We played hard and kept our energy up, and that’s what led us to a win today,” said Crader.

The Scots advanced into the quarter finals of CCS and will take on Monta Vista High School on Nov. 14.