Varsity volleyball barely pulls through with a victory 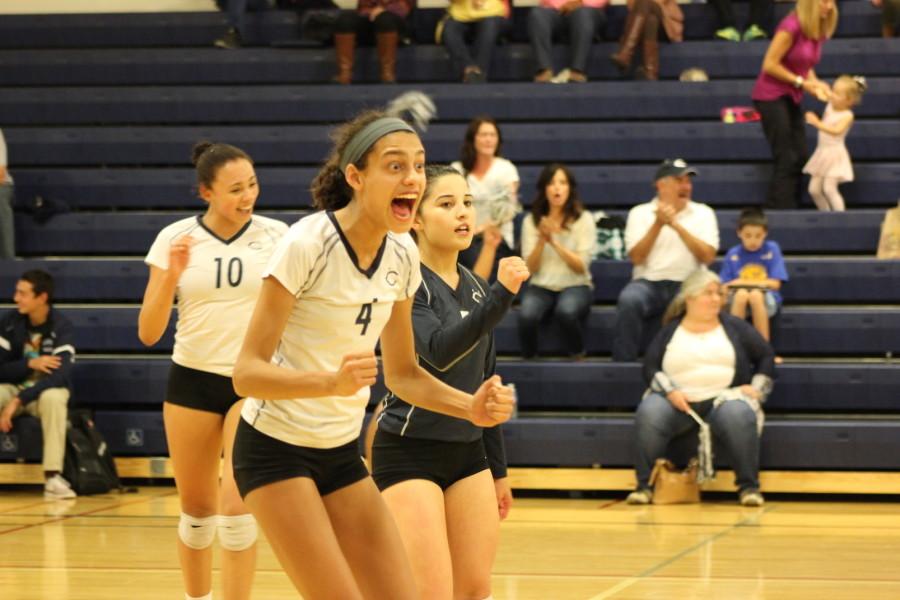 The Lady Scots won a tight victory against the Half Moon Bay Cougars on Oct. 20 as the score bounced back and forth between Carlmont and the underestimated Cougars.

The scoreboard held close scores throughout each of the three sets as the teams played neck and neck in hopes of a victory. Team Captain senior Elena Mateus cheered for her teammates on the court as she encouraged them to work their hardest against the Cougars.

Sophomore Sophie Srivastava said, “It wasn’t our best performance and we had our ups and downs, but Elena was getting everything on the court. She even said ‘please’ when I set her the final point of the night.”

Seniors Mateus and Erin Alonso dominated the court in the first set as they leaped to save kills from the Cougars, resulting in a 25-19 win for the Scots.

The second set intensified as the crowd watched nervously during the final plays of the set. Kills and blocks were rallied across the net as each team refused to give up the fight for the last point needed to win the second set. The Scots dangerously underestimated the Cougars’ plays until sophomore Maya McClellan finally earned the final point of the set, resulting in a 30-28 win.

Senior Erin Alonso said, “It wasn’t our best performance, and I felt we weren’t as focused as we could have been because we underestimated the ability of the other team.”

During the final set of the game, Carlmont continued to pull through with all that was left to win the final set 25-19. Mateus scored the final point with a kill against the Cougars.

Chris Crader said, “We had our ups and downs, but we pulled through and played well at the end of the game.”