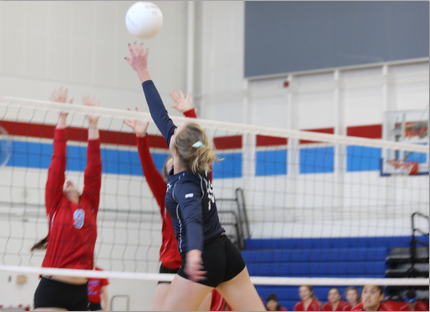 Carlmont High School’s varsity volleyball team is the perfect example of how hard-work and determination eventually do pay off.

With only a mere three sets, the Lady Scots were quickly able to find their rhythm and dominate the Hillsdale Knights.

From the beginning, Carlmont “started fast and controlled the game the whole way through,” Coach Chris Crader said.

The first set started off with Carlmont up 13-6. Lady Scots won the first set 25-15 with a block from Kellan McDonough. The second set began with just as much energy as the first one, and Carlmont picked up a quick lead 16-6. The Lady Scots finished the game with consistency and a game winning hit from Mia Hogan. Her teammate, Alex Lay said, “It was a wicked match point.”

Crader stated, “I strongly believe that you play like you practice. We keep trying to work hard so our matches feel like another day and we are ready to go.”

The Lady Scots did just that in their game. “We played consistent, and it was good we finished the game in three sets,” Mia Hogan said.

“The hours we put into practice are definitely paying off in our game. Our team is getting consistent, we’re serving tougher, and we’re finding more and more stronger hitters,” Crader said.

Carlmont is currently tired for first place in their league and look forward to improving their skills to finish the season strong.

They have upcoming matches against Burlingame, Woodside, and Menlo-Atherton which should be difficult games, but Crader says “With the progress we’ve been making, I’m really excited to seeing the girls be the best they can, and I believe we can win them all.”