Varsity volleyball defeats the Tigers at the ‘Battle of Belmont’

Carlmont varsity volleyball defeated the Notre Dame Tigers in three out of the five sets. 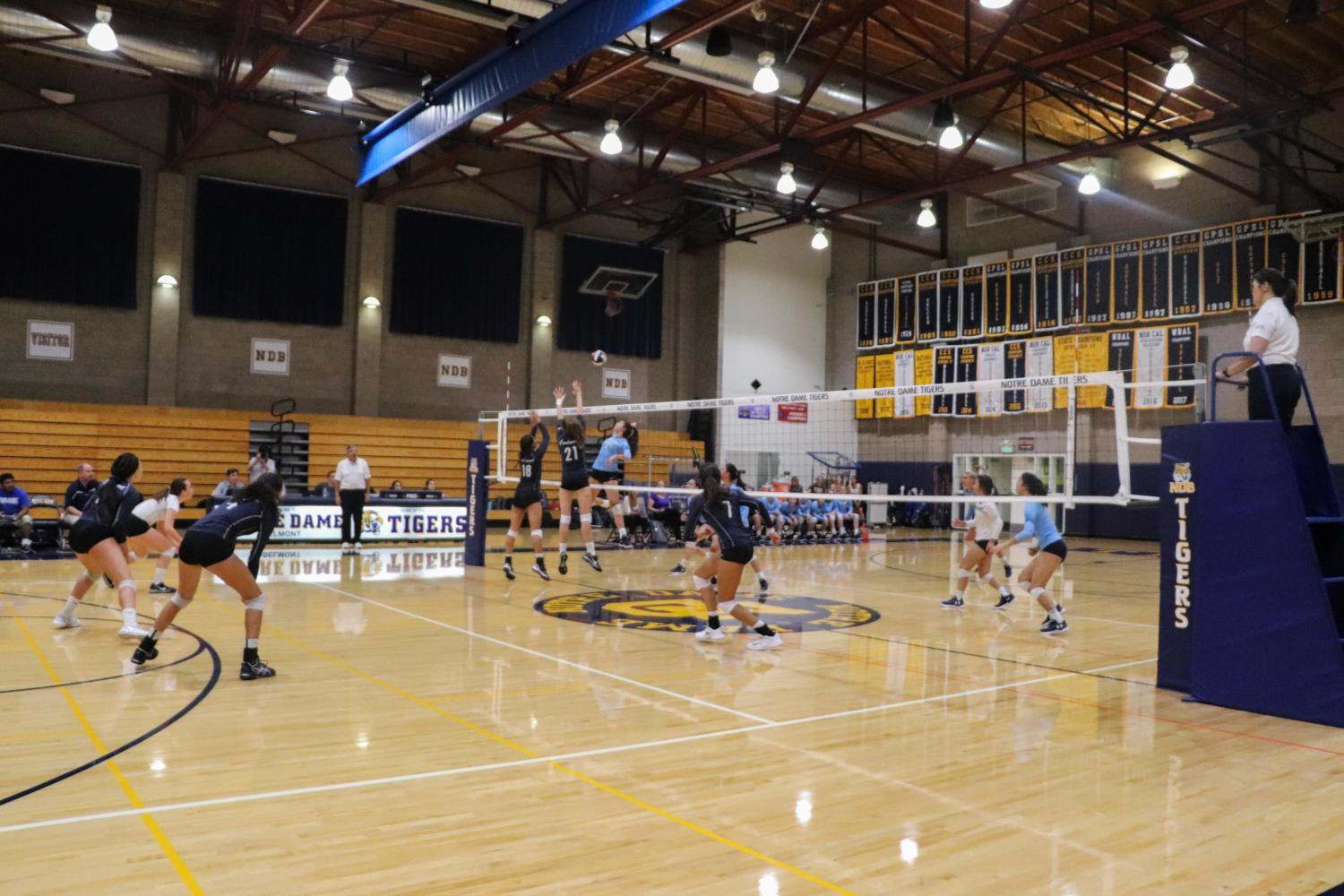 One city. Two schools. One battle.

The Scots defeated the Notre Dame Tigers at the ‘Battle of Belmont’ on Aug. 31. for the first time in four years.

After a historic win in a tournament last weekend against Mitty High School, the best high school volleyball team in the nation, the Scots continued their streak of wins versus the top teams in the area.

However, this match was not an easy win. The score was no more than five points apart at any given time and both teams were ready for a fight.

The Scots had a slow start and their performance displayed a lack of energy. Careless mistakes caused them to lose the first set 25-22.

“I think we underestimated them because they lost almost all of their starters, but they played really well. We were also tired because we have been playing for like two weeks nonstop with only one day off,” said senior Maya McClellan.

As the fourth set approached, Notre Dame’s student section and the Screamin’ Scots began to disappear as many believed the Tigers would prevail. However, that was not the case.

As the fourth set played out, the ball never touched the ground without an intense series of plays and hits. Carlmont found their confidence and won the fourth set 25-19.

After a total of two hours, the Scots won the fifth and final set 15-13.

In the final point of the game, senior Maya McClellan hits a perfect kill to end the match and secure the win for the Scots.

McClellan said, “We were happy that we had won and relieved that it was finally over because it felt like it dragged out forever. I was so glad we finally got the last point.”

Notre Dame’s main starters, such as Krissy Smoot and seven other seniors, graduated in June of 2017. More than half of the squad for the Tigers was freshmen, but that did not hinder their performance. Furthermore, the Tigers only met 12 times before this match.

“We put up a good fight for being such a new team. We went out on the court with the right mentality and we put up a fight,” said Notre Dame junior Kendall Peters.

On Wed. Sept. 6, the Scots will play Mitty High School for the first time since defeating them.

“For Mitty, we need to act like we haven’t beat them before and go in there with a fresh mindset. We know some of their strategies, but we need to expect them to give it all. We have to play the best we can and start off strong with the momentum of the game in our control,” said senior Emma Vanoncini.