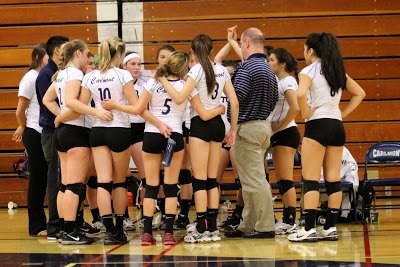 “I’m very proud of each of our girls for this achievement,” said coach Chris Crader. Carlmont was one out of 225 varsity high school teams across the country to receive the Team Academic Award.

The AVCA is a professional organization for volleyball coaches in the United States. With over 5,000 members from across the country, the AVCA administers academic and all-America award programs. It also runs two annual national coaching conventions, and provides educational benefits to collegiate, high school and club volleyball coaches. This year, the AVCA gave Team Academic Awards to a total of 676 programs for 2013-14, including high schools, mens and womens programs, and all levels of colleges and universities.

The 15 varsity Scots had a combined GPA of 3.63 (on a 4.00 scale) during the 2013-14 school year.  “The primary mission of attending high school is to pursue academic excellence, and our girls really did that, with a lot of help from the teachers and staff at Carlmont,” said Coach Crader. “They also played great volleyball, were wonderful teammates, and represented Carlmont High School extremely well. It was an honor to work with each of them.”

The Scots went 21-11 0verall, and 11-3 in PAL last fall. The team reached Central Coast Section (CCS) playoffs for the 12th time in 13 years. The varsity team will be losing five beloved seniors (Charlotte Jackman, Ella McDonough, Bailee Roces, April Smith and Amelia Tupou), however, the Scots will have 10 returning players for the 2014-15 season.

Tryouts for the 2014 season begin on Aug. 15, and the season will be in early September.