Varsity volleyball takes home the win against the knights 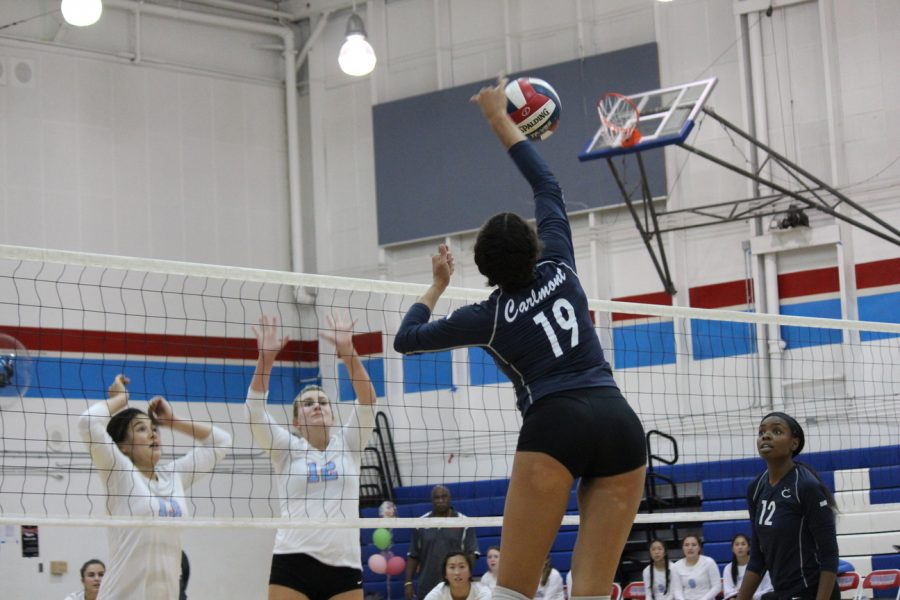 Junior Maya McCllean spikes the ball over the net earning a point for the Scots.

Eyes are locked in on every movement of the ball. The bleachers are quiet. Tense. Each pass is essential to who will win the close match. The players slide and dig for balls. Strong hits fly across the net. It smacks the court as Hillsdale players dive to the ground trying to save it.

The Scots chant from the sideline, “She’s a Freshman!

On Sept 13 the girls’ volleyball team invaded the knights’ castle after a tough battle.  The Knights fought hard but were unable to pull through against the Scots.

Junior Sophie Srivastava said, “We played really well in the first game but the second and third game came close and we lost consistency. We need to not ease up and relax because the other team begins to catch up.”

The Scots asserted their dominance as soon as they stepped on the court. Freshman Alisha Mitha and Morgan McClellan blocked the Knight’s strong hits shutting down chances for Hillsdale. Junior Maya McClellan had forceful hits scoring multiple points for the Scots. Carlmont won the first set 25-19.

Varsity volleyball Coach Chris Crader said,”I think we were a little up and down. It was not consistent but we played hard.”

Players felt the same way as their coach as they felt more effort could be put into the games for a more composed win.

Maya McClellan said, “I think that we didn’t play our best. We won because we have more talent as individuals but we could have played better as a team.”

As the second set began, the Knights took control as they were winning for a majority of the match. Yet this didn’t get the Scots down as they battled back to win 25-23.

Maya McClellan said, “I think to play better we need to practice harder and then will translate into the game and show what type of team we are.”

The Scots finished the third and final set with a win of 25-20. Though the scores remained neck and neck the Scots pulled through with a win.

Varsity volleyball coach Chris Crader said, “I think we need to work on everything right now. It’s one little thing here and then when that was fixed it was another thing there. We need to tighten up.”