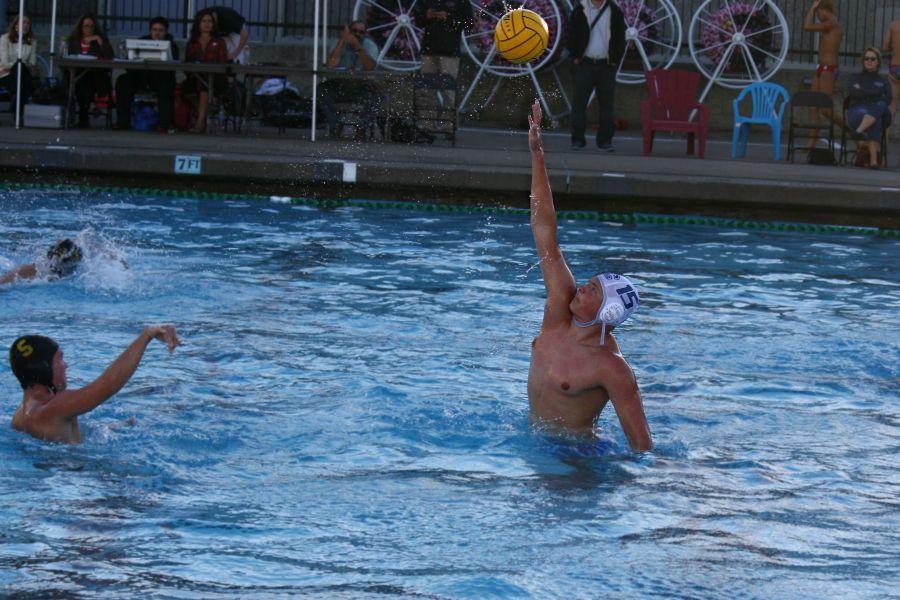 Sophomore Daniel Zorb attempting to intercept a pass by an MA player.

If you caught Tuesday’s varsity water polo match against Menlo-Atherton (MA), you may may have noticed something odd about the line-up.

“We wanted to let the sophomores practice because they didn’t get to play a lot this season. [We wanted them to have playing time,] especially against a really good team,” said senior Pierre Llorach. “A lot of seniors didn’t play so that the second string and sophomores, which will be the starting line-up next year, could get some practice.”

Carlmont varsity water polo lost their Pacific Athletic League (PAL) match to Menlo-Atherton on Nov. 4 with a final score of 22-4.

“This is a team we usually struggle with, and I think it went about the same as it normally goes. Considering the experience level, I think it went pretty well,” said Llorach.

The first quarter was off to a rough start, with Carlmont down 4-0 and five minutes still left on the clock.

Despite the positive vibes from teammates, the coach, and supportive parents, Carlmont continued to lose in the second quarter, 14-3, and in the third quarter, 17-3.

Carlmont received a moment of hope with a little over five minutes left in the fourth quarter, when Zorb brought in the fourth and final goal from Carlmont, which boosted the score to 19-4.

The fourth quarter ended with the final score of 22-4. Despite Carlmont’s loss, the boys kept high spirits, positive attitudes, and appropriate sportsmanship.

“Team chemistry keeps getting better every day, that’s really the key to success. It’s not on the skill of the individual, but on the team as a whole. At first, our team chemistry and communication was really bad, so we lost [quite a few times]. Now, we can play against higher level teams,” said senior Arthur Lam.