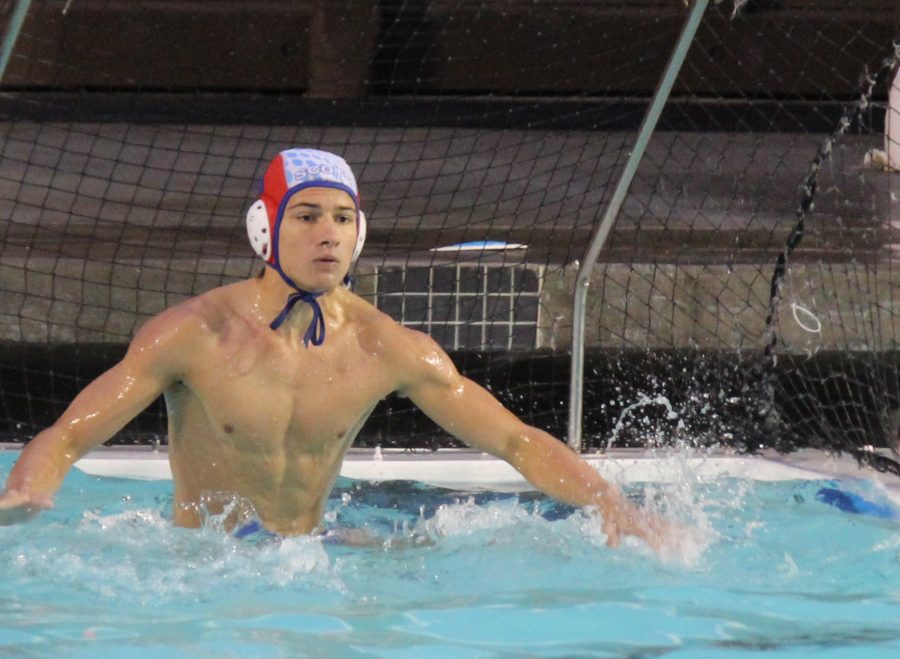 Scots goalie River Manochio getting ready for the game in warm ups. He's looking for another great outing.

Varsity water polo had a lot to prove to themselves and their coach this week against a strong Mills team. On Oct. 27, the Scots showed grit, coming out with the 9-6 win against rivals Mills.

The Scots came out early and kept the pace throughout the game. The fast tempo was in favor of the Scots as they have a much deeper bench and especially for the Scots defense. The anchor of the defense being senior Daniel Zorb.

“Daniel did well. His defense was absolutely perfect. He had almost as many field blocks as our goalie did, so his defense was great,” said coach Justine Hedlund, “Every great team has a great goalie and this team certainly has that in River. Everyone on the team is very thankful to have Manochio holding down the line.”

“He was really on today, he blocked a lot of awesome shots that really should have gone in,” said coach Hedlund and she wasn’t the only one to show praise.

Manochio made multiple saves and kept the Scots in the lead.

“River is the soul of our team, he calls the plays, he’s energetic, and he tells us where to be,” said co-captain senior Owen Mastalir.

“I think sometimes my team needs that extra push to get pumped up,” said Manochio himself.

The Scots were fighting a shaky performance for the usually dominant scorer Zorb. He had shots on target all night but just could not seem to find and offensive rhythm.

This was certainly a defensive game plan by design, which was clear as the Scots packed the water around the goalie and try to make every shot as difficult as possible. The offensive game plan was simple yet effective against a stout Mills defense.

“We stayed spread out, we ran our plays and we played our game. As long as we do that we can beat any team,” said Hedlund.

As the season comes to an end and with this victory, the Scots are happy that they have a chance at a higher placement in the league.

Hedlund said, “Now instead of playing for seventh we are playing for fifth and I think that really reflects better on how our season went. We deserved the better end title.”