Vegetarians give omnivores food for thought 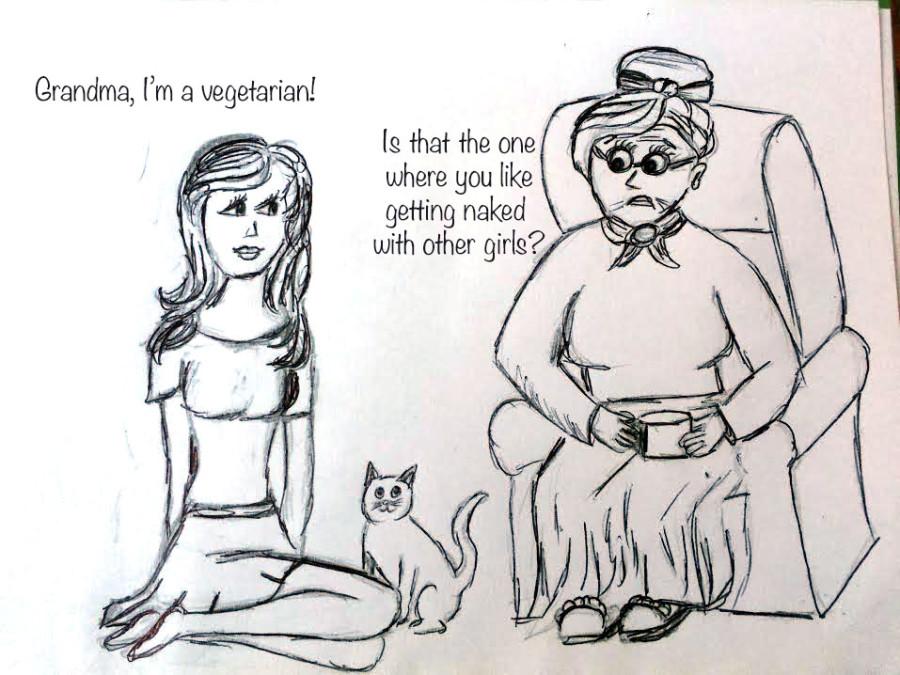 Rumor has it that a common side effect of a vegetarian diet is the oozing moral superiority from of every pore on their body.

Based on the interactions that I have observed between myself, a vegetarian, and the rest of the world, vegetarians are perceived as pretentious monsters.

Ceilings seem to become very interesting to look at whenever my dietary preference is mentioned. I understand why; they expect me to give them a didactic lecture about animal rights, or to begin spewing facts about the effect of livestock on the environment.

I have news for them: not all veg-heads are the outspoken hippies that we are expected to be.  I don’t experience the urge to turn every food related discussion into a crusade to convert people to the green side. All I want to do is order a dish that doesn’t contain meat and continue minding my own business.

I am very accepting of people’s decision to eat meat; my lifestyle doesn’t appeal to everyone. I cook meat for my family on a consistent basis. It frequently needs some more salt since I have no way of tasting the food and would rather serve them slightly bland chicken than Poseidon’s salty butt hole, but I try.

I remember the judgement-filled glare that I received from my uncle when I opted to eat a salad instead of joining him in eating giant sausages. He said, “That is so unhealthy. Where will you get protein? You will become weak and shrivel up and die because of the things you eat.”

Ironically enough, this was just a few months after he underwent a coronary artery bypass surgery. His doctor had encouraged him to adopt a vegetarian diet in order to extend his life expectancy. Apparently, that would only happen over his dead body. I fear that it will.

In my case, vegetarianism isn’t an attention stunt that I pull to cope with being the “misunderstood awkward middle child of the family” (thanks, grandma).

It is the result of strong opinions regarding the consumption of meat, but it is not my defining characteristic as a human being. I am frequently reminded to keep my opinions on the topic to myself because the omnivores around me would respond too kindly.

When the topic is discussed, many meat eaters become defensive. When they are forced to actually think of meat as chopped up, sauteed, and spiced corpses, it becomes much easier to see their steak as a bloody cow rather than delicious meal.

Fellow vegetarians, the others glare at us just because we force them to think about unpleasant things such as eating dead bodies. Don’t take it personally.