Trump and Pence speak at an anti-immigration rally in Arizona. The two publicly denounce football players' kneeling protest on Twitter.

Now, it’s a kneeling tradition, and the White House has had enough.

After kickoff, Pence, a former Indiana governor, left the game with second lady Karen Pence and tweeted, “I left today’s Colts game because @POTUS [President Donald Trump] and I will not dignify any event that disrespects our soldiers, our Flag, or our National Anthem.”

According to CNN, National Football League (NFL) spokesperson Joe Lockhart said the league had no comment regarding the vice president’s actions.

Shortly after, Trump followed up with a tweet of his own, supporting Pence’s leaving the game.

He said, “I asked @VP Pence to leave stadium if any players kneeled, disrespecting our country. I am proud of him and @SecondLady Karen.”

Later, Pence issued an official statement to justify his response to the protesting players.

He said, “I left today’s Colts game because President Trump and I will not dignify any event that disrespects our soldiers, our Flag, or our National Anthem. At a time when so many Americans are inspiring our nation with their courage, resolve, and resilience, now, more than ever, we should rally around our Flag and everything that unites us. While everyone is entitled to their own opinions, I don’t think it’s too much to ask NFL players to respect the Flag and our National Anthem. I stand with President Trump, I stand with our soldiers, and I will always stand for our Flag and our National Anthem.” 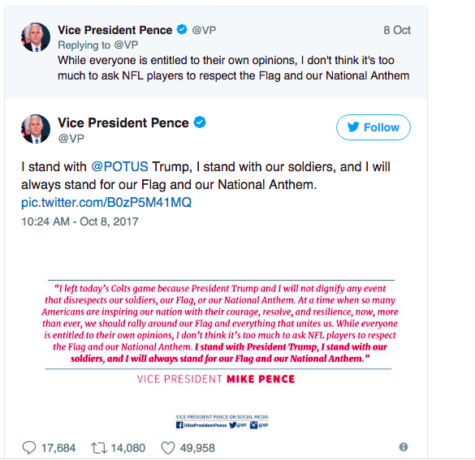 The Trump administration was tweeting in response to a peaceful protest that former 49ers quarterback Colin Kaepernick started in August 2016. While the administration was not in office during that time, Trump’s recent responses to the ongoing protest have brought the debate to the forefront of media coverage.

Trump’s tweets denounced the kneeling football players by expressing how he feels that the protest disrespects the flag and the country.

However, in past statements, Kaepernick has stressed his intent to highlight racial oppression, not disrespect veterans.

“I am not going to stand up to show pride in a flag for a country that oppresses black people and people of color,” Kaepernick said in an interview with NFL.com. “To me, this is bigger than football and it would be selfish on my part to look the other way.”